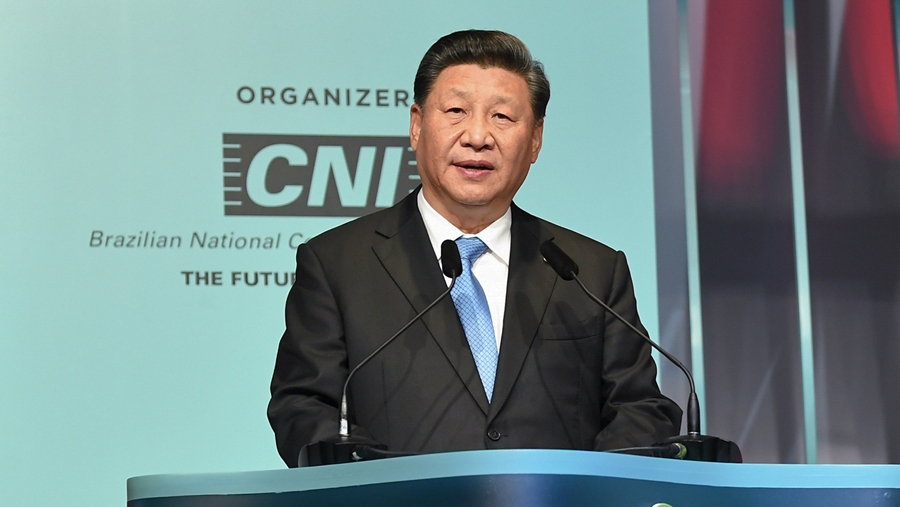 Chinese President Xi Jinping said protectionism and unilateralism have dealt a blow to international trade and are pressuring the global economy into a slowdown. He made the remarks in a speech at the closing ceremony of the BRICS business forum in Brasilia, Brazil on Wednesday.

Business leaders from Brazil, Russia, India, China and South Africa made proposals on economic policies to the five countries' leaders.

Xi also urged business leaders from the states to boost confidence in growth and find innovative ways to deal with the rising challenges posed by protectionism.

He said that the world is facing a new round of technology revolution and industrial changes, which gives a strong boost to productivity and socioeconomic development. At the same time, protectionism, unilateralism and hegemony are on the rise, striking a blow to international trade and pushing down the global economy.

The business community takes the lead in business cooperation among BRICS countries, so the community should continue to play an active role as it is at the forefront of changes, said Xi.

He also vowed China will continue to further open up its market, boost imports and improve its environment for foreign businesses and investment.

The building of the Belt and Road has entered a new phase of high-quality development, and businessmen should seize the opportunity to gain more fruitful results, said the Chinese president.