A young man, wearing a mask to protect himself from the spread of the new coronavirus, prays in front of the closed Candelaria church in Guatemala City, Wednesday, April 8, 2020. (AP Photo/Moises Castillo)

A young man, wearing a mask to protect himself from the spread of the new coronavirus, prays in front of the closed Candelaria church in Guatemala City, Wednesday, April 8, 2020. (AP Photo/Moises Castillo)

A man wears a protective mask while waiting for a bus in Detroit, Michigan on Wednesday, April 8, 2020. (AP Photo/Paul Sancya)

A man wears a protective mask while waiting for a bus in Detroit, Michigan on Wednesday, April 8, 2020. (AP Photo/Paul Sancya) 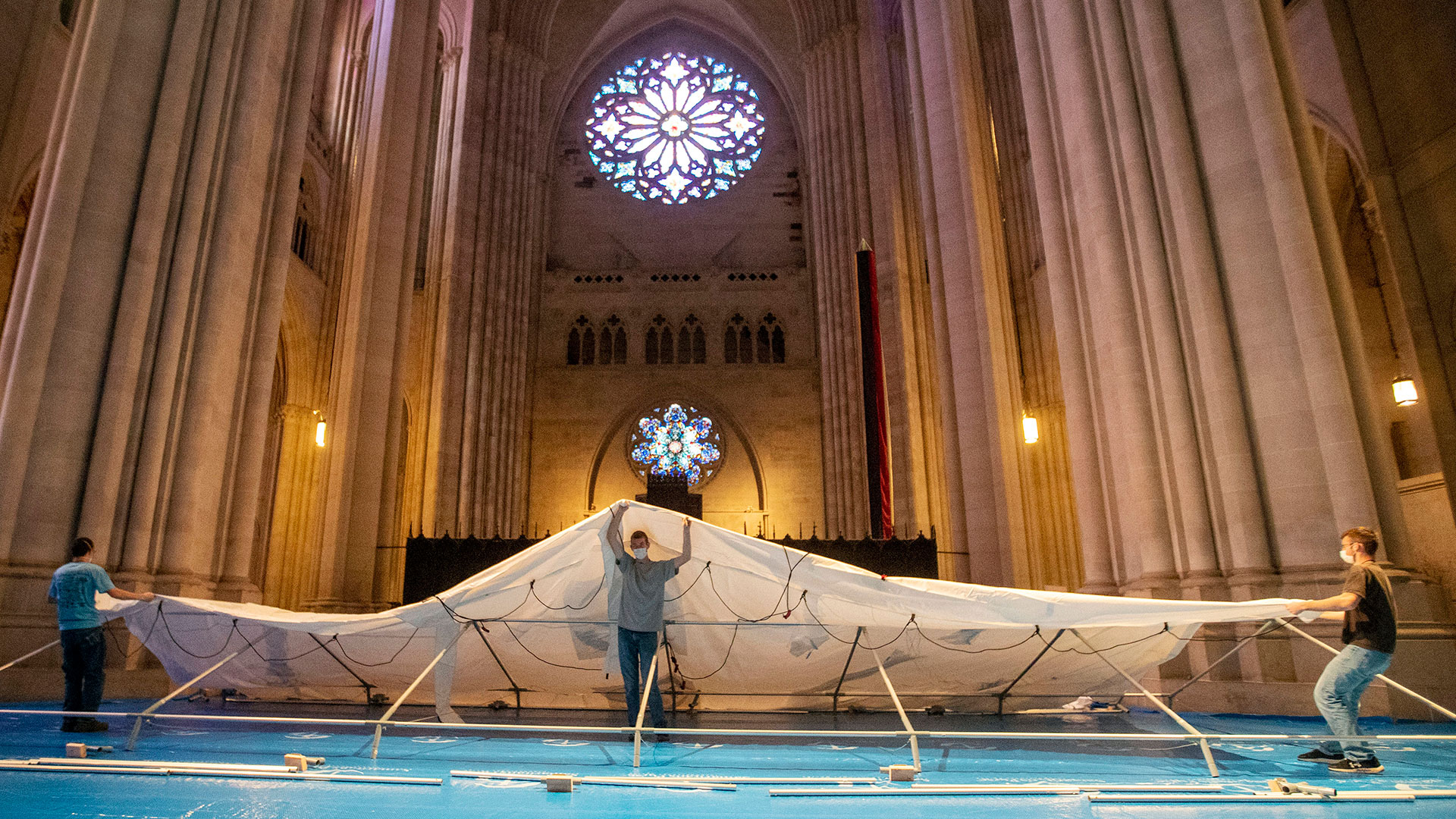 Volunteers raise a tent while building a field hospital at the Cathedral of St. John the Divine, Wednesday, April 8, 2020, in New York. (AP Photo/Mary Altaffer)

Volunteers raise a tent while building a field hospital at the Cathedral of St. John the Divine, Wednesday, April 8, 2020, in New York. (AP Photo/Mary Altaffer)

The coronavirus pandemic has so far infected more than 1.5 million people around the world, and has caused nearly 88,000 deaths, according to Johns Hopkins University as of Wednesday evening.

Communities are running out of time to build new medical facilities for any overflow of coronavirus patients that local hospitals can't handle, said the general who heads the U.S. Army Corps of Engineers.

Lt. Gen. Todd Semonite told reporters he believes the Corps will be done starting new projects in about a week.

He said government leaders "have to think through the worst case and get ahead of it while they have time."

If a city thinks they'll see a peak of virus patients around April 24, and they haven't made a decision yet to build more rooms, it may be too late, he says.

The decision to forge ahead with Wisconsin's election amid a pandemic has stirred fears about a possible spike in the state's coronavirus cases in the face of stay-at-home orders and efforts to limit contact with others.

Voters who didn't get absentee ballots were forced to choose Tuesday between voting in person or staying at home to avoid possible exposure to the coronavirus. Thousands waited in line in Milwaukee, and long waits were reported in Green Bay. Voters and poll workers wore masks and gloves. Volunteers sat behind Plexiglass shields as they handed voters their ballots.

"From a public health perspective, this was counter to all good scientific evidence and advice right now for how to continue to curb the pandemic from having serious impacts in the state," said Kristen Malecki, an epidemiologist at the University of Wisconsin School of Medicine and Public Health.

As health officials around the world push to get more ventilators to treat coronavirus patients, some doctors are moving away from using the breathing machines when they can.

The reason: Some hospitals have reported unusually high death rates for coronavirus patients on ventilators, and some doctors worry that the machines could be harming certain patients.

The evolving treatments highlight the fact that doctors are still learning the best way to manage a virus that emerged only months ago. They are relying on anecdotal, real-time data amid a crush of patients and shortages of basic supplies.

The government is set to report another shocking level of unemployment claims Thursday even after nearly 10 million people applied for benefits in the previous two weeks because of business shutdowns from the coronavirus.

The number will likely keep increasing, in part because many states are still clearing out backlogs of applications for unemployment aid. And with more companies running through their cash cushions as the virus-related shutdowns persist, they are resorting to layoffs to save money.

Up to 50 million jobs are vulnerable to coronavirus-related layoffs, economists say — about one-third of all the jobs in the United States. That figure is based on a calculation of positions that are deemed non-essential by state and federal governments and that cannot be done from home. It's unlikely all those workers will be laid off or file a jobless claim. But it suggests the extraordinary magnitude of unemployment that could result from the pandemic.

Even as coronavirus deaths mount across Europe and New York, the U.S. and other countries are starting to contemplate an exit strategy and thinking about a staggered and carefully calibrated easing of the restrictions designed to curb the scourge.

At the same time, politicians and health officials warn that the crisis is far from over despite signs of progress, and a catastrophic second wave could hit if countries let down their guard too soon. Deaths, hospitalizations and new infections are leveling off in places like Italy and Spain, and even New York has seen encouraging signs amid the gloom.

"We are flattening the curve because we are rigorous about social distancing," New York Gov. Andrew Cuomo said. "But it’s not a time to be complacent. It's not a time to do anything different than we've been doing."

Story by the Associated Press.