Should you be scared of the Asian giant hornet?
Lisa Chiu 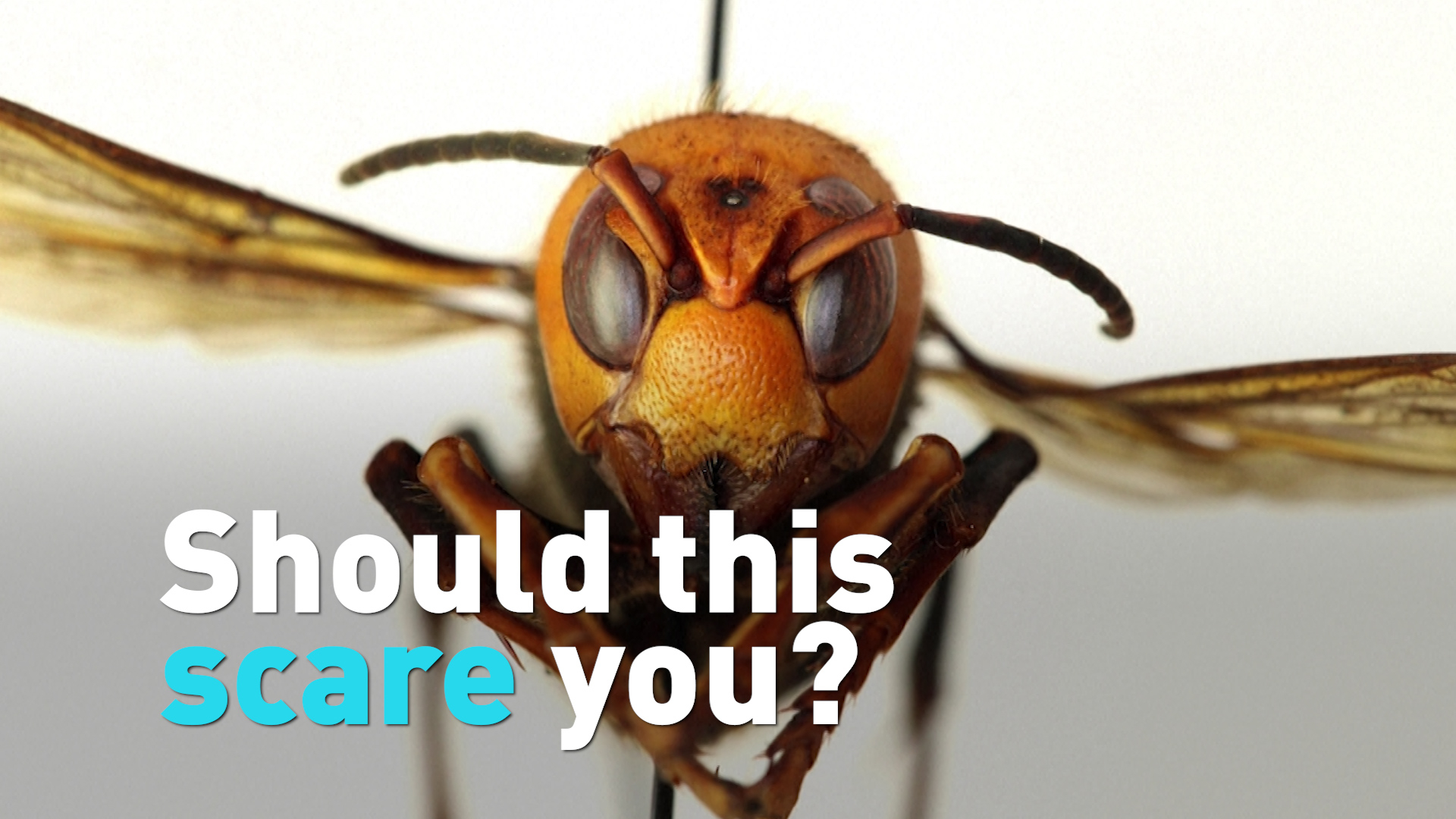 The Asian giant hornet, also known as Vespa mandarinia, is the the biggest hornet in the world and can grow up to 4 centimeters long.

It's also been dubbed the "murder hornet" because of how it feeds.

These hornets will enter a honey bee colony, decapitate the bees, and eat the larvae and pupae.

The hornets are native to East Asia. They're hunted and eaten as a delicacy in Japan.

But they can be found also in Russia and Southeast Asia.

The hornet has now made its way to North America, likely on a cargo ship,

where it was first spotted in Canada in September 2019, and then in the U.S. state of Washington three months later.

Asian honey bees have developed a way to surround an attacking Vespa mandarinia en masse and suffocate it.

But North American honey bees are mainly descended from an Italian sub-species that does not resist an attacking hornet.

The fear is that a growing Asian giant hornet population in North America could further devastate the honey bee population -- and threaten the U.S. food supply due to loss of pollination.

But how much of this threat is real?

So far, only two hornets have been seen in the U.S. One flew off and another was found dead.

With a nickname like "murder hornet," there are also worries about attacks on people.

The size of the insect means it has a lot more venom and it's able to sting multiple times.

The Asian giant hornet is estimated to cause 30-50 deaths a year in Japan, according to the USDA. The deaths are mainly associated with allergic reactions.

Experts say they are unlikely to attack humans unless provoked.

"You shouldn't worry about it," says Floyd Shockley, the entomology collections manager at the Smithsonian National Museum of Natural History. "More people die of honey bee stings in the U.S. than die annually, globally, from these hornets."

Officials in Washington are hoping to trap these hornets before their population can grow and they want to educate the public about them so they can be spotted and eradicated.

However the timing of the hornet's appearance in the United States, and widespread use of the label "murder hornet" during the coronavirus pandemic has taken this story to a different level.

Some are questioning why, like the coronavirus, it needs a geographic region to define itself.

"Let's talk about racialized geographies and the violent displacement of racism onto insects by naming them "Asian murder hornets" and "Africanized bees" and "Mexican tarantula hawks" we see you you're not slick," wrote @Vanessid on Twitter.

"The issue I have with it is that everything has to be said where it comes from in the name. German Measles, 'Chinese virus' 'Asian Murder Hornet'" Why can’t the virus be the virus, the hornet be the Murder Hornet, and th measles be the measles?" wrote Chris Bibb on Twitter.

These bees actually have a lot of names. They're known as "great sparrow bees" in Japan, "tiger head bees" in China and "general officer hornets" in Korea.

Many entomologists do not not recommend calling the insect a "murder hornet."

"What the hornet does is it feeds on — it preys on — honey bees," said Dessie Underwood, an entomologist at Cal State Long Beach, in an interview with the Los Angeles Times. "Just like a lion feeds on a gazelle — you don't call it a murderous lion. Everyone has to eat something."

According to the EPA and other be experts, the biggest threats to honey bees in the United States remain parasitic mites, viruses, lack of genetic diversity, AND

Climate change, pesticide exposure, and poor nutrition due to loss of habitat.

In other words, humans.