U.S. Secretary of State Mike Pompeo met with Israeli Prime Minister Benjamin Netanyahu on Wednesday in Jerusalem, where the two discussed Israel's plans to annex parts of the West Bank.

Their meeting took place during a day of violent clashes between Israeli troops and people in the occupied territory. One Palestinian teen was reportedly shot and killed.

As the coronavirus pandemic rages around the world, Pompeo landed in Tel Aviv wearing a red, white and blue facemask. He headed directly to Jerusalem and is exempted from a mandatory two-week quarantine.

Pompeo is the first foreign official to visit the country since January as Israel has sealed its borders to stop the pandemic.

Netanyahu and his collation government partner, the Blue and White Party's Benny Gantz, will be swearing-in their government on Thursday, an occasion postponed to accommodate for the meeting with Pompeo.

The new government plans in July to begin debating extending sovereignty to Israeli settlements and the strategic Jordan Valley in the West Bank, territory Israel captured in a 1967 war and that Palestinians seek for a future state.

In an interview with the Israel Hayom newspaper, where he was quoted in Hebrew, Pompeo said the West Bank territorial moves were an Israeli decision that Netanyahu and Gantz have a right to make.

But Pompeo noted the issue was complex and required coordination with Washington, which has formed a joint team with Israel to map out new territorial lines in the West Bank in accordance with Trump's Middle East plan.

He said he and the Israeli leaders also talked "about many other issues related to it – how to deal with all parties involved, and how to make sure the move is done properly" under Trump's plan.

The Palestinians have rejected Trump's plan, under which the vast majority of West Bank settlements would be incorporated into "contiguous Israeli territory."

The plan envisages a Palestinian state under near-complete Israeli security control, made up of stretches of land in the West Bank, as well as the Gaza Strip on the Mediterranean coast and two expanses of territory in Israel's southern Negev desert.

In televised remarks on Wednesday night, President Mahmoud Abbas said the Palestinians would review their peace accords with Israel and agreements with the United States should Israel annex West Bank land. 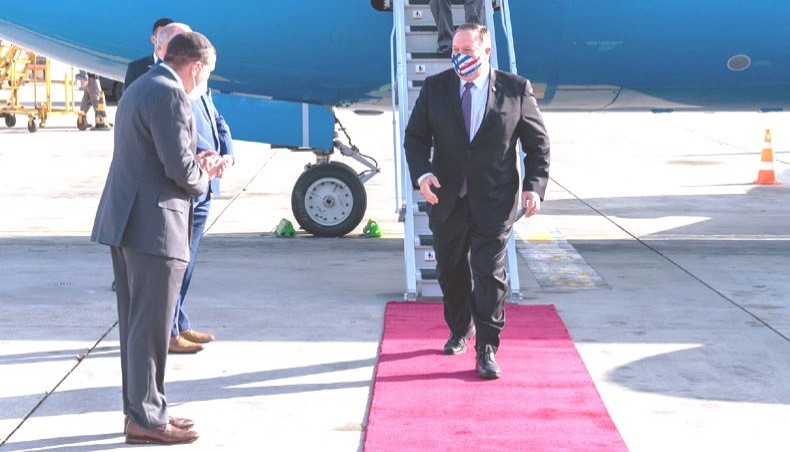 The virus, Iran and annexation

Israel ranks as one of the world's most effective countries in the face-off against the coronavirus pandemic. As early as February, swift and sweeping measures to contain the virus were implemented, leading to a 1.6 percent COVID-19 fatality rate – compared with 5.9 percent in the U.S. Sharing information with the secretary of state on COVID-19 strategies and policies is a natural derivative of the allies' close ties.

When it comes to Iran, both Israel and the U.S are mostly in sync. Prior to his visit, Pompeo referred to addressing Iran's "malign" activity in the region – in recent weeks Israel has been named as the culprit behind airstrikes on Iranian interests in Syria.

Israel's leaders favor broadened sanctions against Iran and a complete dismantle of the nuclear agreement signed in 2015 by China, the U.S., the UK, France, Russia and Germany with Iran while President Obama was in office. In meetings with Pompeo, Israel's prime minister is expected to push for those measures.

Annexation of 30 percent of Palestinian land under Donald Trump's "Deal of the Century" peace plan is reportedly the key reason for Pompeo's visit.

In recent weeks, leading Israeli political figures have publicly talked about a July 1 target date for annexing land occupied by Israel since 1967. According to international law the occupation is illegal – international bodies including the EU and UN are warning Israel of repercussions in the face of annexation including EU sanctions.

While Secretary of State Pompeo's visit is widely perceived as a strategy move intended to shape and propel annexation to boost Donald Trump's ratings among right wing and evangelist voters in the lead-up to November elections, there is also a perception that the U.S. may urge Israel to back down from any near future annexation moves

Pompeo's China reference – stated publicly upon arrival in Jerusalem – also indicated the current state of China-U.S. relations and U.S. concern over China-Israel ties. Referencing Israel as a trusted ally that "shares information unlike some other countries that try and obfuscate and hide that information," Pompeo remarked "we'll talk about that country too," as he stood behind a podium 6 feet from Israeli Prime Minister Benjamin Netanyahu's dais.

The Trump administration has pressed U.S. allies to limit Chinese investment in their countries. China ranks as Israel's second biggest trade partner after the United States.