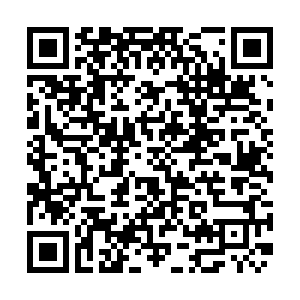 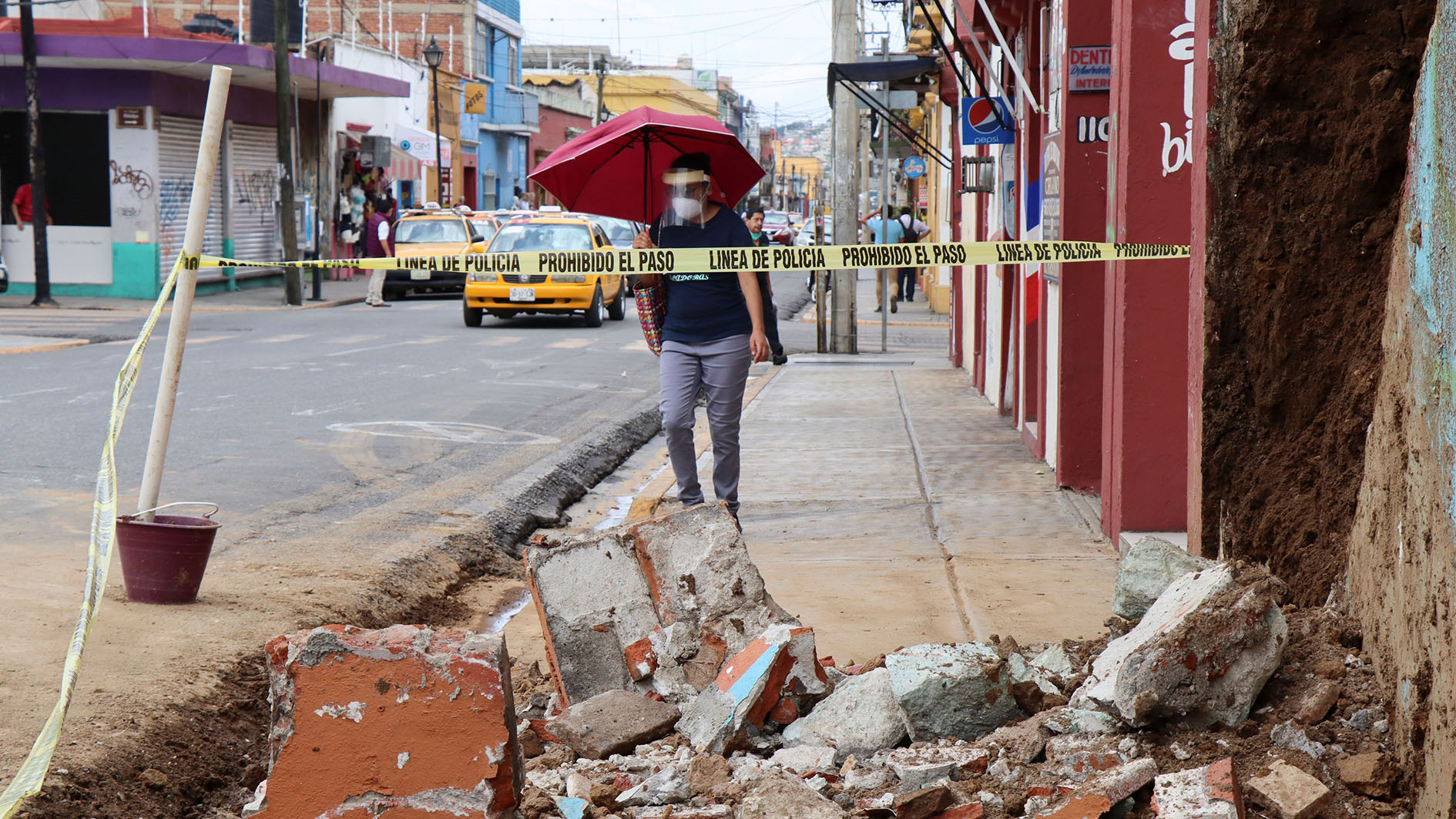 A powerful magnitude 7.4 earthquake struck southern Mexico's Pacific coast on Tuesday, killing at least six people and seriously injuring others in isolated villages, while causing damage to buildings hundreds of miles away in Mexico City. But an initial tsunami warning was later reversed.

After initially publishing a reading of 7.1, the Mexican Seismological Service revised its figure to 7.5.

Mexico President Andrés Manuel López Obrador said one person was killed and another injured in a building collapse in Huatulco, Oaxaca. Otherwise, he said reports were of minor damage, including broken windows and collapsed walls. Oaxaca Gov. Alejandro Murat later said a second person was killed in an apparent house collapse in the tiny mountain village of San Juan Ozolotepec, and said a third died in circumstances he did not explain.

Federal civil defense authorities reported two more deaths: a worker at the state-run oil company, Pemex, fell to his death from a refinery structure, and a man died in the Oaxaca village of San Agustin Amatengo when a wall fell on him.

Pemex also said the quake caused a fire at its refinery in the Pacific coast city of Salina Cruz, relatively near the epicenter. It said one worker was injured and the flames were quickly extinguished. Churches, bridges and highways also suffered damage during the quake.

López Obrador said there had been more than 140 aftershocks, most of them small. 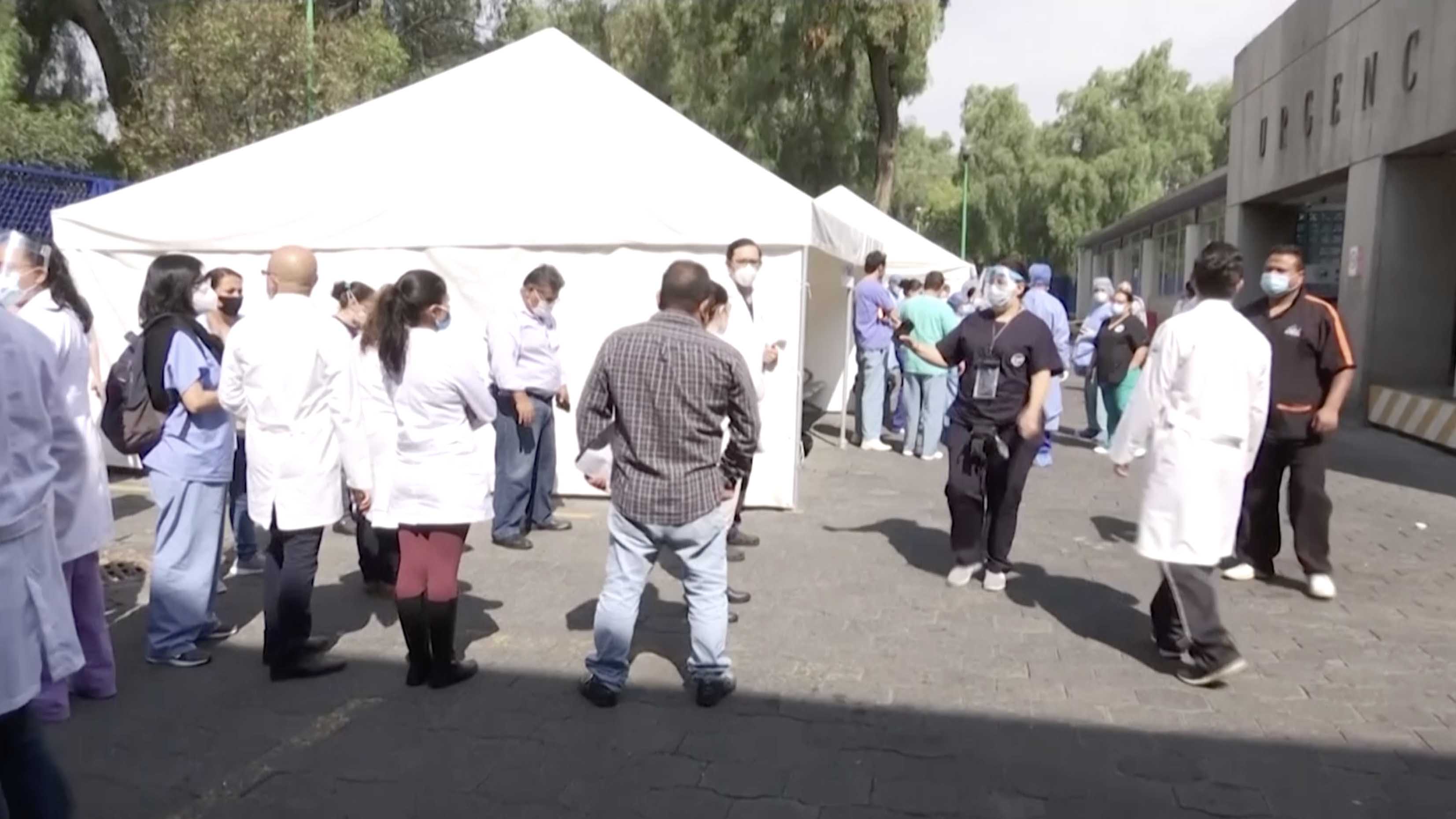 Seismic alarms sounded midmorning with enough warning for residents to exit buildings. Power was knocked out to some areas.

Groups of people still milled around in close proximity on streets and sidewalks in some neighborhoods of the capital about an hour after the quake. Some were not wearing masks despite past appeals from municipal officials for them to do so as a way to curb the spread of the coronavirus.

"With all the virus problems and now the tremors, and I've just lost one child and the other is ill, so imagine (how I'm feeling)," a tearful Maria Teresa Duran, 80, told AFP.

The quake took many people by surprise in the capital, including some working from home due to virus lockdown measures.

"We were working in our pajamas, finishing off breakfast and then we had to get out like this," said 29-year-old Sonia Flores Cano.

Inside a Mexico City military barracks converted to COVID-19 hospital, medical staff suited in protective equipment tried to calm anxious patients. Unable to evacuate isolation areas, patients huddled under a large beam in the women's ward while a nurse tried to calm one having a panic attack.

Teresa Juárez could only wish for it to pass quickly from her hospital bed where she lay connected to oxygen. Diabetic and with high blood pressure, Juárez said she thought about her five children. "It's horrible, you're here and you don't know what to do," she said. 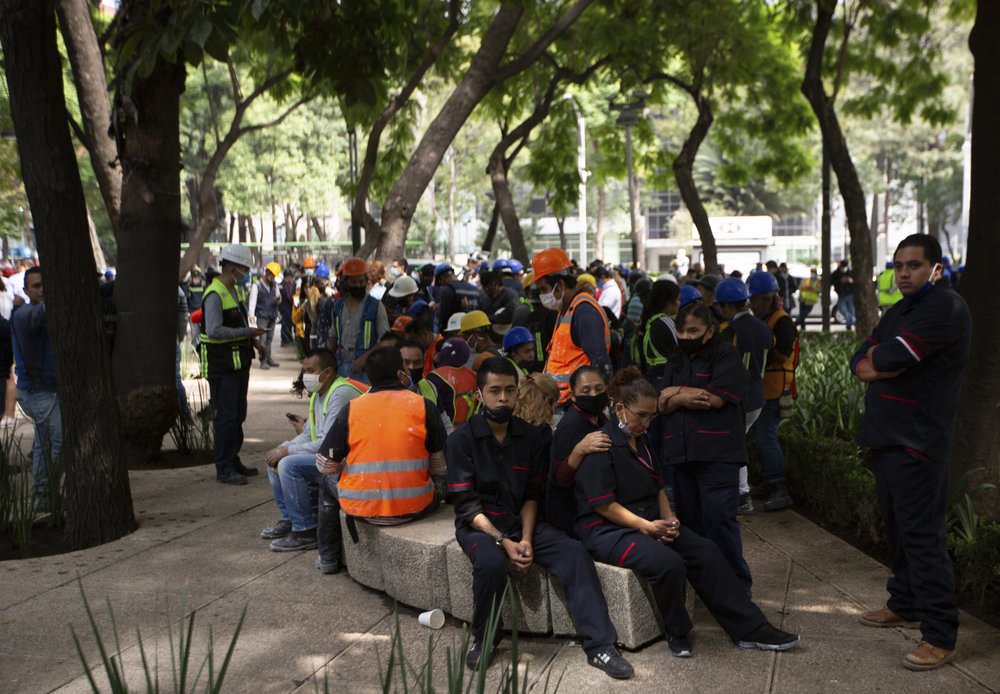 Employees gather outside of their work building after a magnitude 7.5 earthquake, in Mexico City, June 23, 2020. /AP

Employees gather outside of their work building after a magnitude 7.5 earthquake, in Mexico City, June 23, 2020. /AP

The U.S. Geologic Survey (USGS) said the quake hit at 10:29 a.m. along Mexico's southern Pacific coast at a depth of 16 miles (26 kilometers). The epicenter was 7 miles (12 kilometers) south-southwest of Santa Maria Zapotitlan in Oaxaca state.

In Huatulco, a laid-back beach destination known for surfing and small protected coves, the earthquake knocked goods off shelves and some rubble from buildings.

Mari González of the Princess Mayev hotel in Huatulco said staff and guests were able to evacuate the building before the quake, but that 45 minutes after the initial quake they were still outside as strong aftershocks continued.

"It was strong, very strong," she said.

González said there was some visible broken glass and mirrors, but no major damage. The staff was waiting for the aftershocks to dissipate before fully evaluating the property.

Local news media reported damage to some buildings in the state capital, Oaxaca city. State officials said they were looking for damage.

The USGS estimated that some 2 million people felt strong or moderate shaking and another 49 million felt weak or light shaking.

The earthquake hit a quake-prone region where four underground tectonic plates come together. In the past 35 years, there have been at least seven magnitude 7 or greater earthquakes, killing around 10,000 people — most of them in a 1985 8.0 quake. 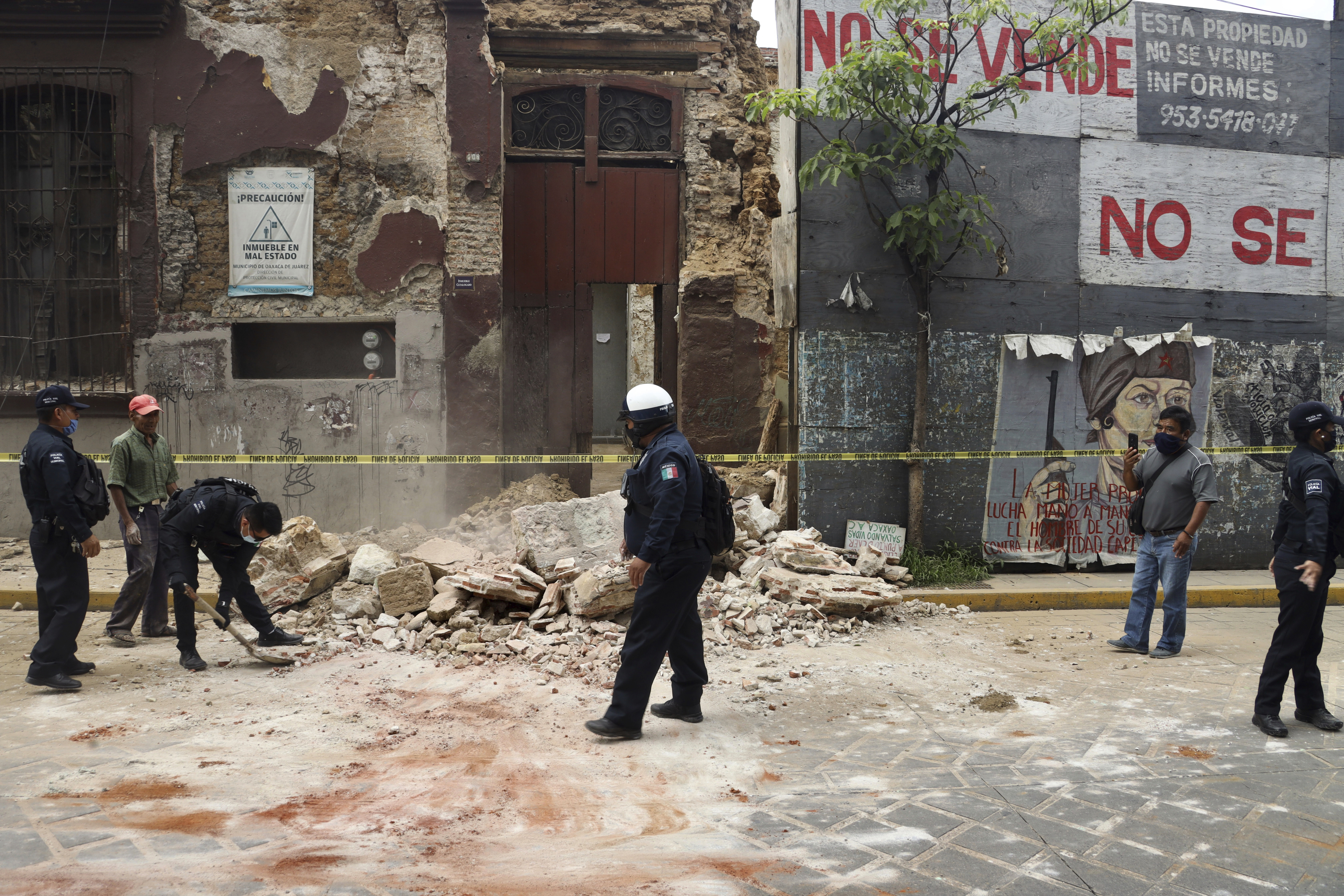 A policeman removes rubble from a building damaged by an earthquake in Oaxaca, Mexico, June 23, 2020. /AP

A policeman removes rubble from a building damaged by an earthquake in Oaxaca, Mexico, June 23, 2020. /AP

"This has the potential to be a deadly earthquake and cause significant damage," USGS seismologist Paul Earle said. "This area is capable of and has had larger earthquakes in the past."

"There will be aftershocks," Earle said. "It is not unexpected to see a magnitude 6 at this point and a number of smaller ones."

This quake happened when the Cocos plate, which is to the southwest of the area, slipped under the North American plate, Earle said.

"You've got all sorts of plates and they're moving quickly," Earle said. "The important thing is how fast the plates are moving relative to each other."

The U.S. Pacific Tsunami Warning Center initially said hazardous waves as high as three meters could strike anywhere within 1,000 kilometers of the quake's epicenter, affecting the Pacific coast of Mexico and Central and South America.

However, a few hours later it said the threat had "largely passed."