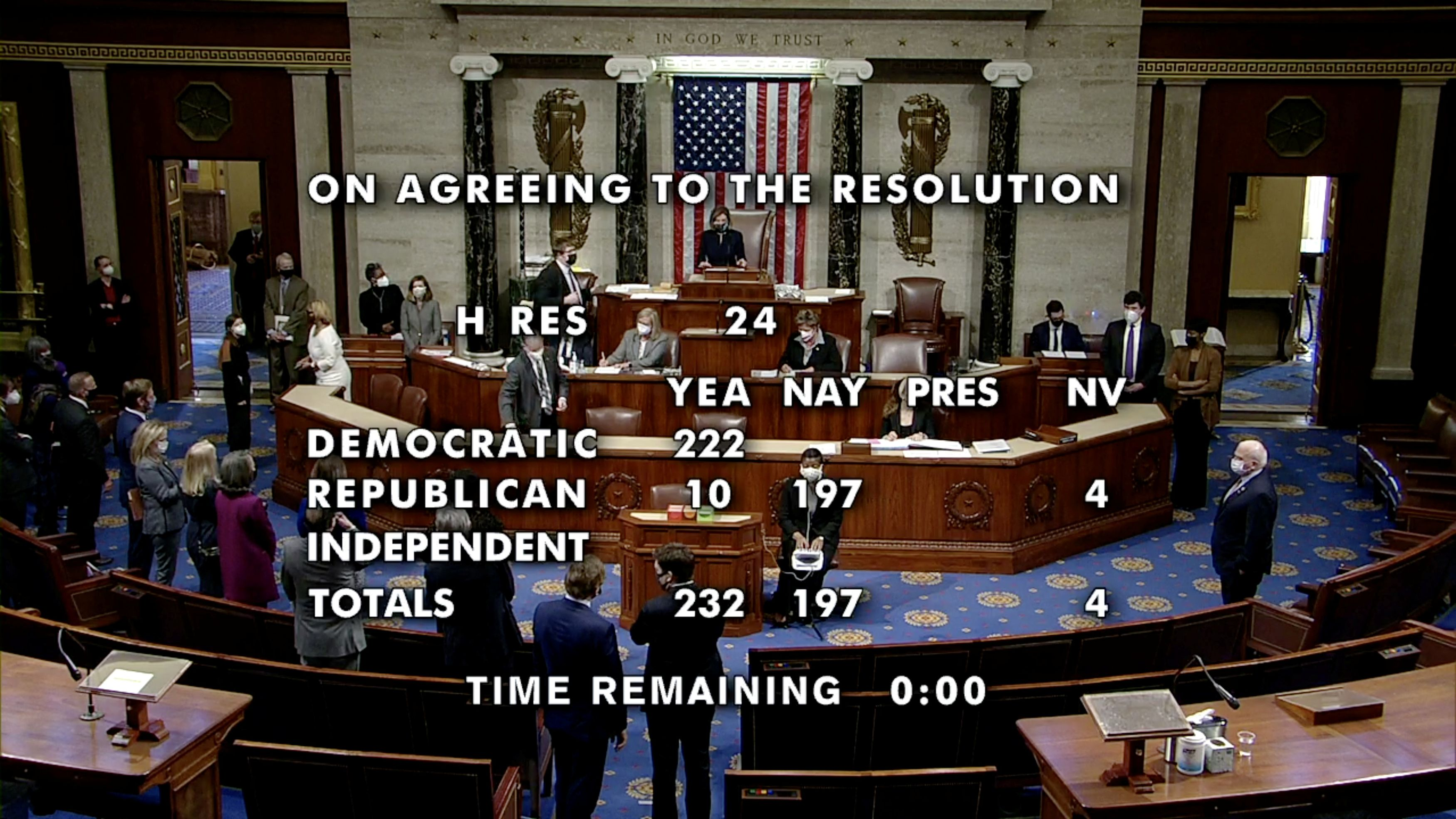 The House of Representatives votes to impeach U.S. President Donald Trump for inciting insurrection, in this frame grab from video shot inside the House Chamber of the Capitol in Washington, U.S., January 13, 2021. /Reuters

The House of Representatives votes to impeach U.S. President Donald Trump for inciting insurrection, in this frame grab from video shot inside the House Chamber of the Capitol in Washington, U.S., January 13, 2021. /Reuters

Donald Trump has become the first American president to be impeached twice, a week after violent protesters stormed the U.S. Capitol.

Trump is charged with "inciting violence against the government." The House of Representatives voted on Wednesday to impeach him by 232 to 197. Ten Republicans voted to impeach.

After the Capitol siege, what is the future for Trumpism?

No U.S. president has ever been removed from office through impeachment. Three – Trump in 2019, Bill Clinton in 1998 and Andrew Johnson in 1868 – were impeached by the House but acquitted by the Senate.

"The president of the United States incited this insurrection, this armed rebellion against our common country," House Speaker Nancy Pelosi, a Democrat, said on the House floor before the vote. "He must go. He is a clear and present danger to the nation that we all love." 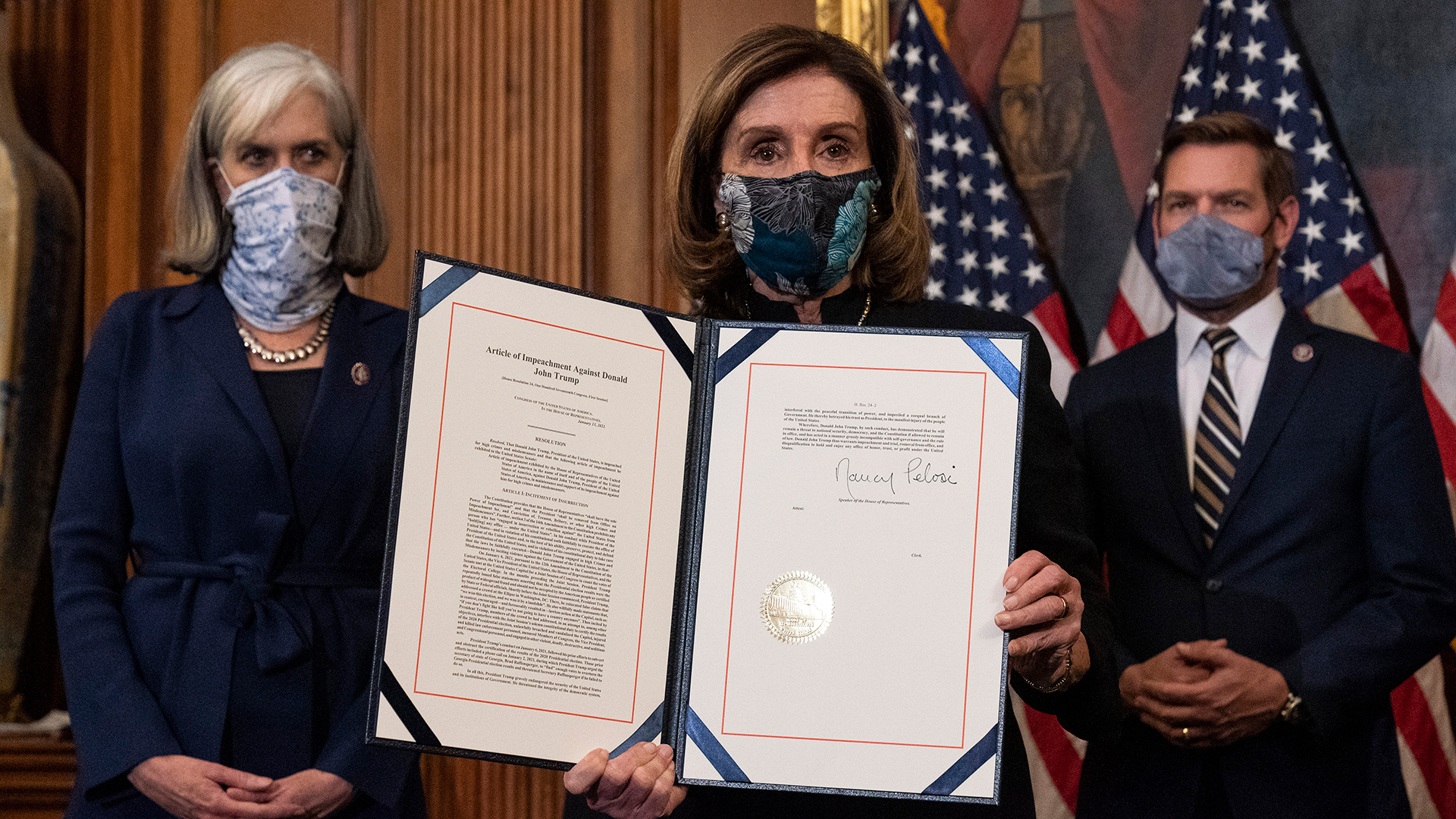 Ten of Trump's fellow Republicans joined 222 Democrats in backing impeachment in the House, where Democrats hold a slim majority. In the Senate, Republicans still have control until two newly elected Democrats from Georgia take their seats and Vice President-elect Kamala Harris, who will wield the tiebreaking vote in the 50-50 chamber, is sworn in alongside Biden.

No Democrats voted against impeachment.

Trump's reaction and his future?

Trump released a video on Twitter on Wednesday evening without mentioning impeachment.

Instead, he focused his remarks on the violence at the Capitol on January 6, which ultimately led the House to move against him.

"I want to be very clear, I unequivocally condemn the violence that we saw last week. Violence and vandalism have absolutely no place in our country and no place in our movement," Trump said.

Neither a House impeachment nor a Senate vote to convict Trump could prevent him from holding office in 2024 or beyond. U.S. Senators need to approve an additional vote to bar Trump from the presidency in the future.

Legal experts said disqualification could be accomplished through the impeachment proceedings or the 14th Amendment of the U.S. Constitution. 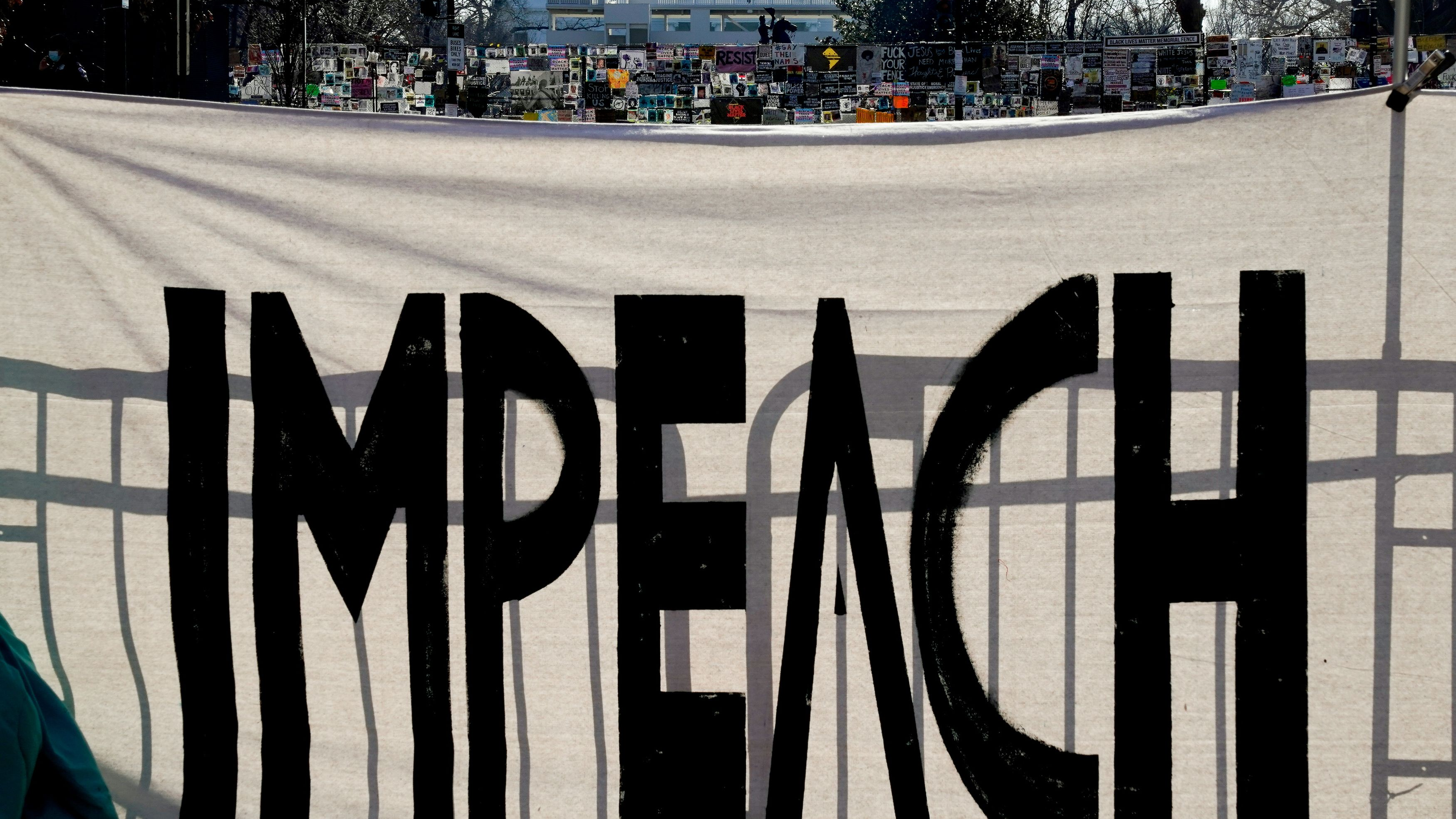 A protest sign reading is seen on Black Lives Matter Plaza near the White House one week after rioters stormed the U.S. Capitol building in Washington, January 13, 2021. /Reuters

A protest sign reading is seen on Black Lives Matter Plaza near the White House one week after rioters stormed the U.S. Capitol building in Washington, January 13, 2021. /Reuters

The U.S. Constitution says there are two ways to punish an impeached official: removal from office or "disqualification to hold and enjoy any office of honor, trust or profit under the United States."

Trump's impeachment trial in the U.S. Senate will not begin until next week, outgoing Majority Leader Mitch McConnell said on Wednesday, setting the stage for a partisan brawl in President-elect Joe Biden's first days in office.

"Even if the Senate process were to begin this week and move promptly, no final verdict would be reached until after President Trump had left office. This is not a decision I am making; it is a fact," McConnell said in a statement.

McConnell said a "fair or serious trial" cannot conclude before Biden is sworn in.

"The Senate has held three presidential impeachment trials. They have lasted 83 days, 37 days and 21 days, respectively," he noted in a statement.