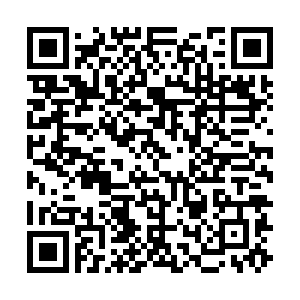 U.S. President Joe Biden marks 100 days in office on April 29th. Compared to his predecessor Donald Trump, Biden's job approval rating of 54 percent is higher than Trump's during the same time period, according to FiveThirtyEight's polling average. Here are some differences on what Biden has done from Trump in the first 100 days in office.

According to a poll from NPR, Biden's job rating was higher than Donald Trump's at this same point in time (40% approve, 54% disapprove), but was lower than Barack Obama's during the first 100 days in office (61% approve, 30% disapprove). 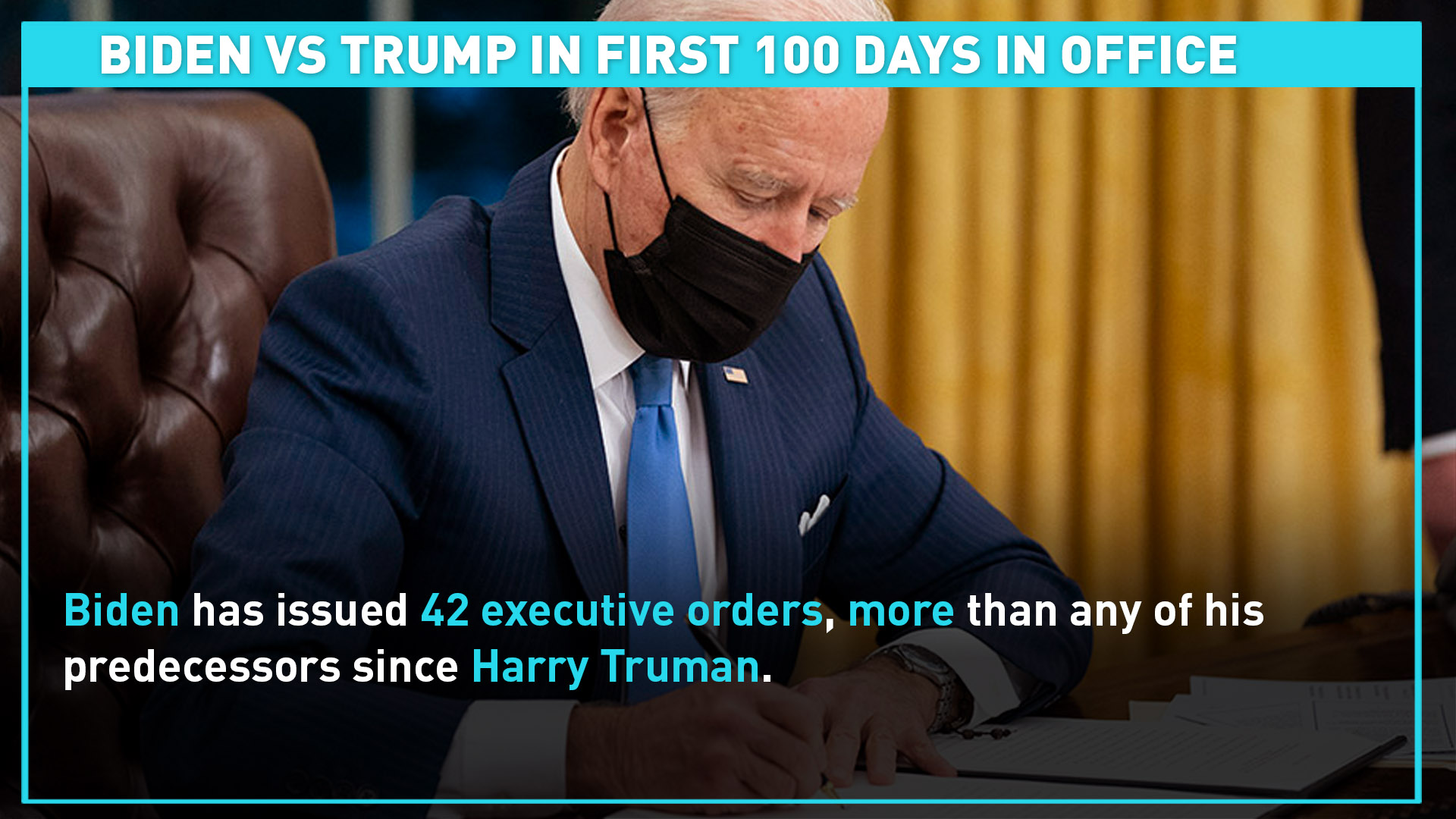 Biden has made the most use of executive orders and memorandums to implement policies that do not require congressional approval, including measures that require mask wearing on public transportation including airports and federal properties, increasing the minimum wage for federal contract workers, and the cancellation of the Keystone XL pipeline. Biden has issued 42 executive orders in his first 100 days in office while Trump issued 33 during the same period of time. 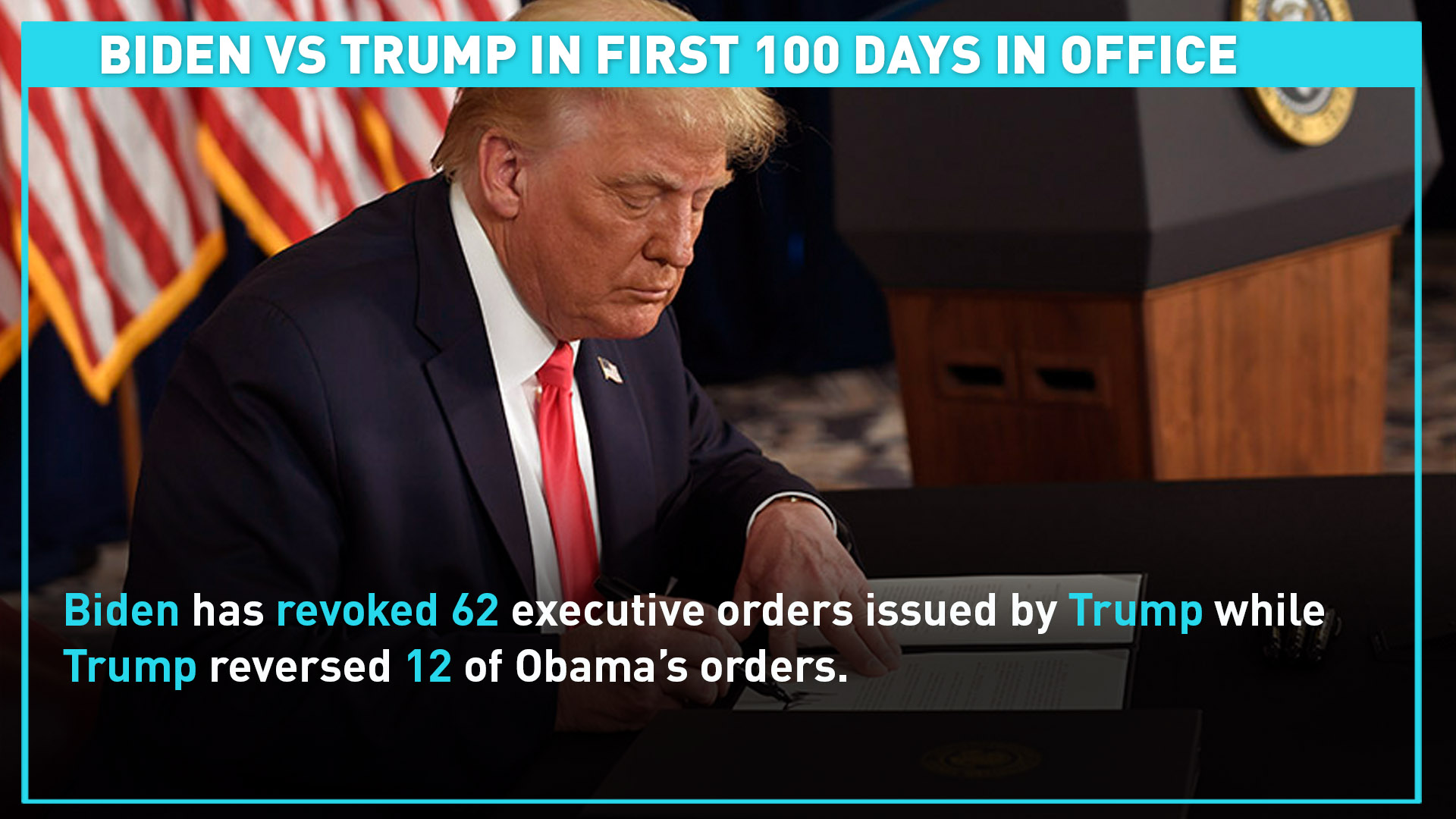 "And I want to make it clear — there's a lot of talk, with good reason, about the number of executive orders that I have signed — I'm not making new law; I'm eliminating bad policy," Biden said as he signed a batch of actions on immigration on February 2.

As of April 23, Biden has reversed 62 out of 219 orders signed by former president Donald Trump, according to the American Presidency Project. The reversals range from halting the southern border wall construction, lifting refugee bans to rejoining the Paris Climate accord and reversing the ban on transgender people joining the U.S. military.

During Trump's first 100 days in office, he reversed 12 Obama administration's orders, including withdrawing from the Trans-Pacific Partnership, lifting caps on greenhouse gas emissions by power plants, rolling back Clean Water Act and expanding offshore oil and gas drilling in the ocean. "Presidents throughout history are acknowledged as a success when they get legislation passed through the Congress — major legislation that affects the lives of people. And that ultimately will be the test for this president," Leon Panetta, former Secretary of Defense, and White House Chief of Staff, said.

So far, Biden has signed 11 bills, the fewest since former president Barack Obama. By comparison, Trump had the most signed into law with total 28 bills in his first 100 days. But political analysts emphasized that the significance of the bills is much more important than the number of bills. 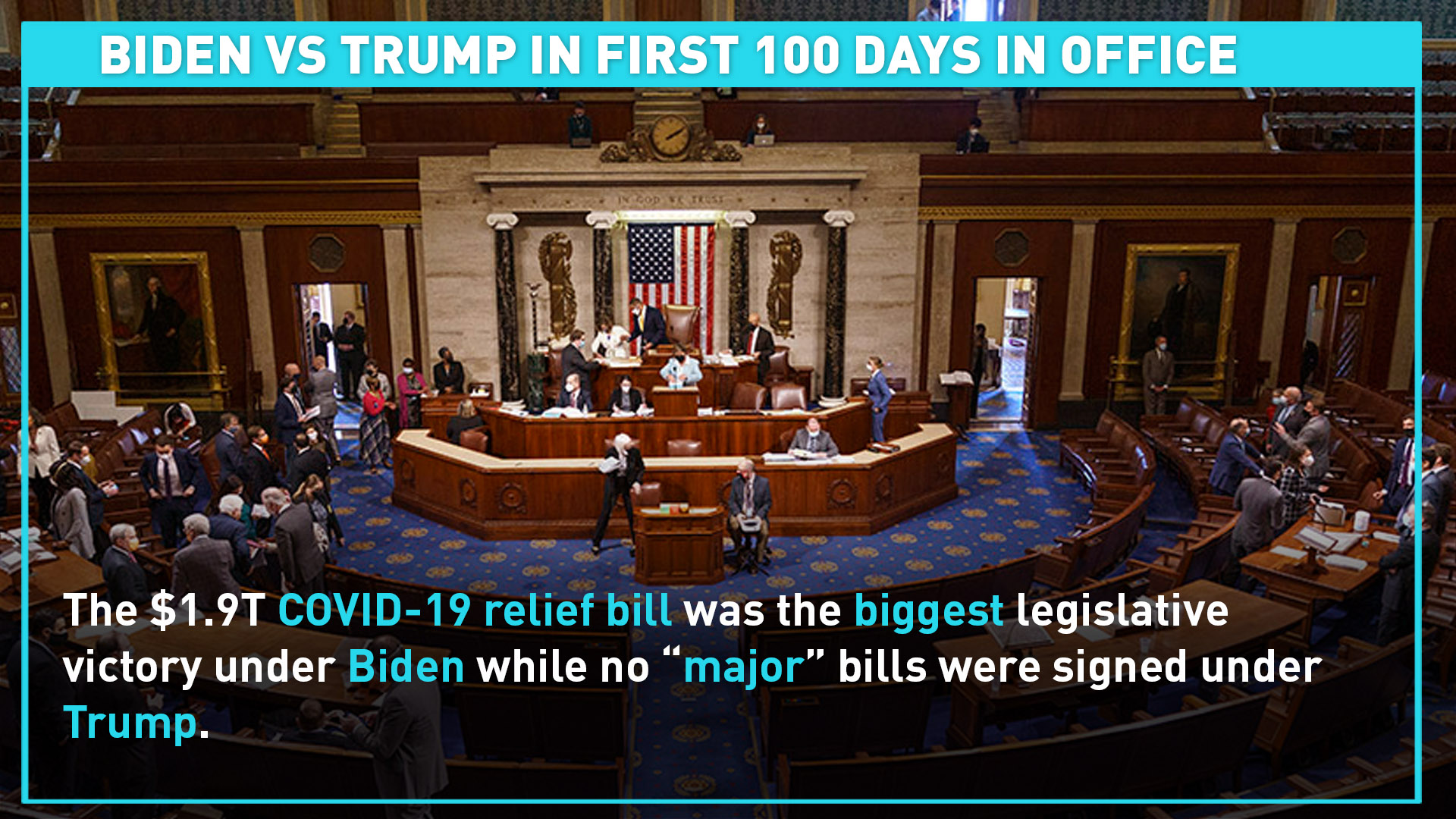 Biden signed the $1.9-trillion coronavirus relief bill into law in March. As one of the largest economic stimulus legislations in U.S. history, it promised to provide economic aid to millions of households, increase unemployment benefits, support small businesses, and speed up COVID-19 testing and vaccine rollout. With the help of this relief bill, Biden has kept his goal of vaccinating 200 million Americans in the first 100 days. 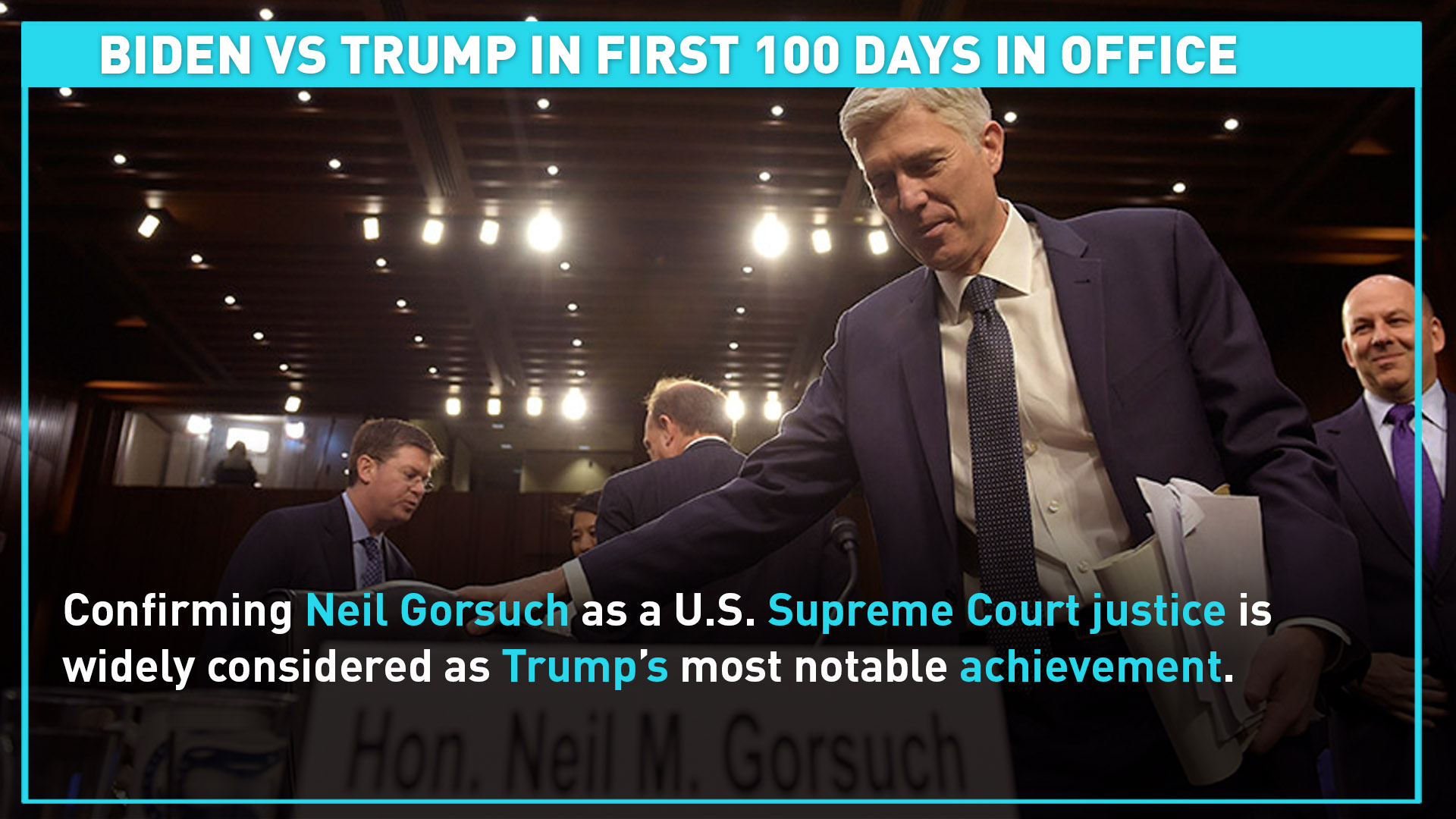 Former president Trump insisted that he had achieved "more than any other president in the first 100 days," but according to media reports, he didn't sign any "major legislation" that could affect lives of ordinary people.

"I would say that confirming a Supreme Court justice of the United States who will probably be there for 30 years is a big legislative achievement," said Marc Short, Trump's legislative affairs director when asked to name a major new law under Trump.

His selection was welcomed by conservatives. As Democrats strongly objected his choice, Republicans were forced to enact the "nuclear option" to confirm Gorsuch with a simple majority of 51 votes instead of 60. The rule change has made it easier to fill a Supreme Court seat by future presidents. 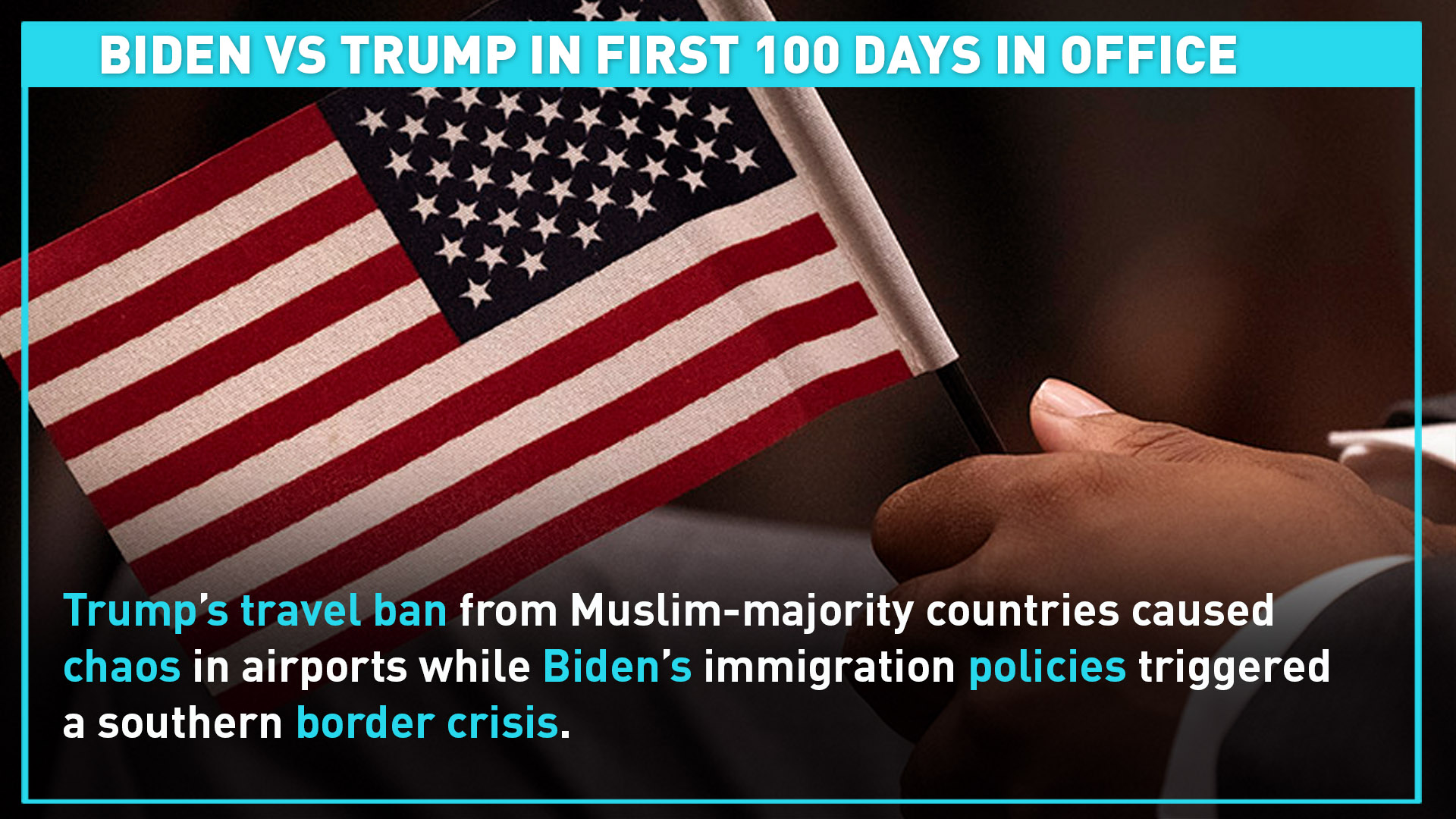 In terms of immigration, Biden and Trump took different approaches, but both failed to avoid chaos when implementing their policies.

Trump signed an executive order to ban visitors from seven Muslim-majority countries. His order sparked outrage and created chaos after airlines turned away immigrants and refugees from those countries and many arrivals in the U.S. were detained at airports. Thousands of people protested at several airports across the U.S.

Biden promised to handle immigration differently than Trump. In his first 100 days, he rolled back Trump's harsh immigration policies, allowed over 25,000 asylum seekers with active cases to cross U.S. border and plans to grant amnesty to millions of illegal immigrants. The message has triggered migrant surge at the U.S. border. According to the Washington Post, about two million migrants are expected to cross the U.S. border this year. As of April 21, more than 23,000 unaccompanied children remain in U.S. government custody, CNN reports.

40 percent of Americans disapprove of Biden's handling the border crisis that led to growing unaccompanied children at the U.S.-Mexico border while only 24 percent approved of his response, according to a recent poll by Associated Press-NORC Center for Public Affairs Research.

In an opinion article, W. James Antle III, politics editor from Washington Examiner blamed Biden for not having a "meaningful" plan to resolve the "predicable" border crisis before sending positive signals to the migrants.

Some analysts say how much a president can achieve within first 100 days is quite limited. "It's not fair to judge presidents by their first 100 days," political scientist David Jones said. But it can provide a glimpse into a president's "priorities, governing strategy and possible problems."