A mechanical engineer and his colleagues have created a new type of white paint they say can reflect up to 98.1% of sunlight and cool surfaces where it's used.

Xiulin Ruan and his colleagues at Purdue University say they’ve made a paint whiter than virgin snow that could be be the equivalent of "Vantablack," the blackest black which absorbs up to 99.9% of visible light.

The new ultra-white is made with barium sulfate, a compound used to whiten photo paper and cosmetics, ABC news reports.

This new paint works better than researchers' previous version, which can reflect 95.5% of sunlight and is based on calcium carbonate.

Tests of this new paint found it kept surfaces 19 degrees Fahrenheit cooler at night and 8 degrees cooler under noonday sunlight.

The scientists also say they could likely make the paint even whiter by increasing the particle concentration, according to ABC News.

Could this new paint help fight global warming and bring down energy costs in the areas that use it? 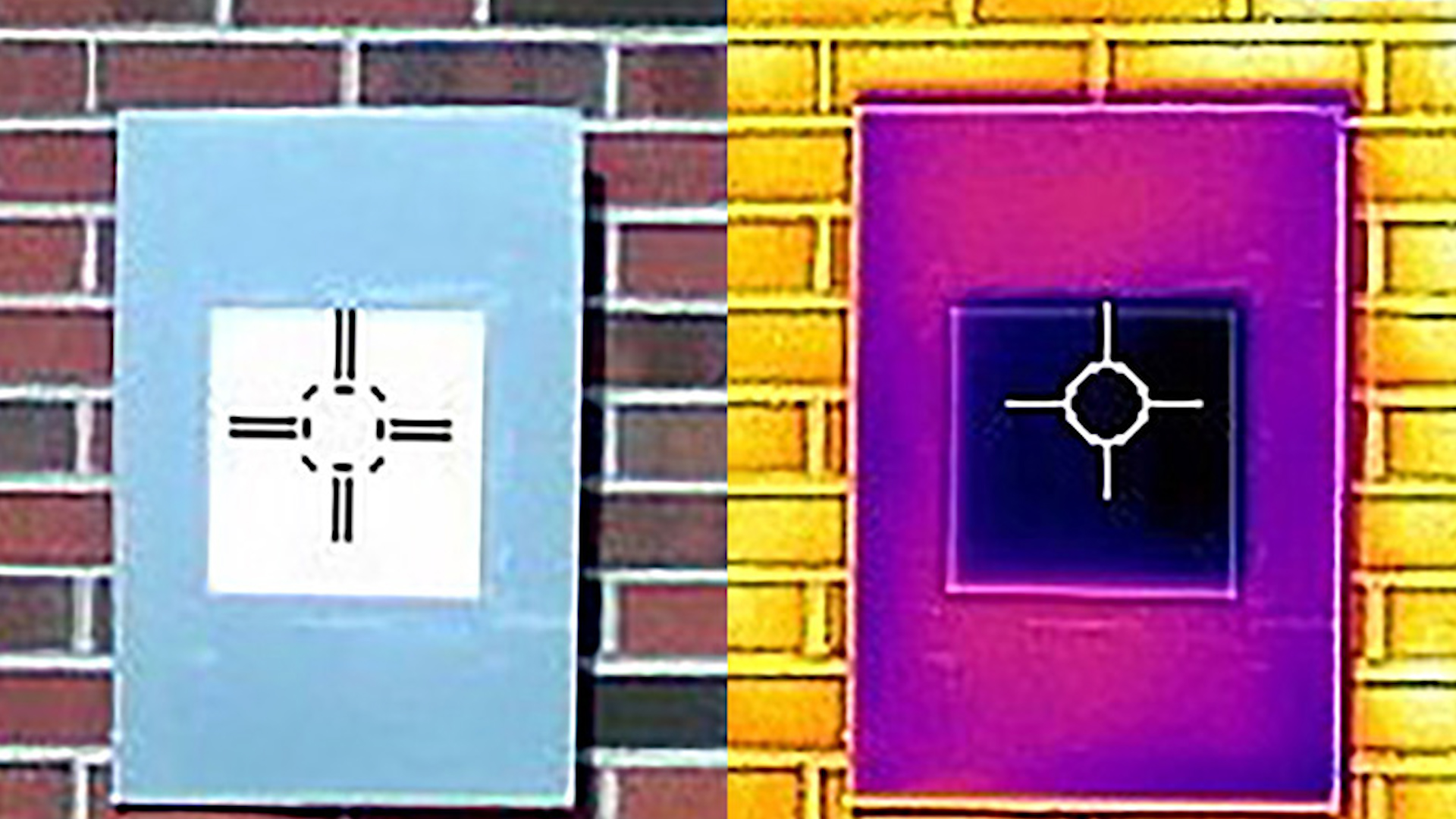 An infrared camera shows how a sample of the whitest white paint (the dark purple square in the middle) actually cools the board below ambient temperature, something that not even commercial “heat rejecting” paints do. (Purdue University/Joseph Peoples)

An infrared camera shows how a sample of the whitest white paint (the dark purple square in the middle) actually cools the board below ambient temperature, something that not even commercial “heat rejecting” paints do. (Purdue University/Joseph Peoples) Many urban spaces, surrounded by asphalt, turn into 'urban heat islands,' with temperatures measurably hotter than surrounding areas, especially if there are few trees.

Environment experts predict as the planet gets warmer, high-heat days could double in some cities by 2040, the Washington Post reports.

This newly created white paint won’t be available commercially for another two years.

But Los Angeles, California, is already embracing the cooling effects of "going white."

In 2018, L.A. began painting some of its streets in a gray-white coating called CoolSeal, which helps reflect sunlight away from the asphalt.

The city says streets using CoolSeal are 10 to 15 degrees Fahrenheit cooler compared to other L.A. streets, as reported by CBS News.

But making the move can be pricey, costing $40,000 for every mile coated.

Painting buildings white to reflect sunlight has long been common in Greece and other countries.
And cities such as New York and Chicago currently have programs to paint roofs white.

However, while white paints now on the market reflect a significant amount of sunlight, they also warm surfaces rather than cool them the way Ruan's newly created white paint does.

In the future, Ruan and his team see many commercial applications for their paint, including using it on buildings, cars and outdoor equipment.