U.S. President Biden met with his Russian counterpart Vladimir Putin for their first face-to-face meeting with Biden as president. Their meeting lasted for about four hours. Relations have been deteriorating for years, notably with Russia's 2014 annexation of Crimea from Ukraine, its 2015 intervention in Syria, and U.S. charges - denied by Moscow - of meddling in the 2016 election that brought Donald Trump to the White House. They sank further in March when Biden said he thought Putin was a "killer", prompting Russia to recall its ambassador to Washington for consultations. The United States recalled its ambassador in April. After their meeting, Putin says he and Biden agreed to return ambassadors to posts in a bid to lower tensions.

In a press conference following their meeting, Putin called Biden "an experienced statesman" who was "very different from his predecessor, President Trump". When asked how much he trusted Biden, Putin said there is “a factor of trust”, and it is “not a family-based trust.” Although Biden had said he would put pressure on Russia prior to the meeting, Putin said he “didn’t experience pressure”, but there were candid exchanges. Putin said that there were no personal or diplomatic deviations from the goals of the talk.

On being called a "killer"

Responding to Biden’s earlier accusation that he thought Putin was a “killer”, Putin said, “Am I a killer? How do we define killer? People die all the time.” He said in the U.S. the police just shot a black woman in the back, in Afghanistan, drones kill groups of civilians and the U.S. says these were mistakes. “But who is responsible?” Putin asked.

Putin said the distortion of his image in U.S. media is something he has lived with for decades. He spoke about how two Russian press outlets - RT and Sputnik - were both forced to register as foreign agents in the U.S which hindered their ability to report freely. He said that the Russian agencies have complied with all U.S. rules and regulations but U.S. press agencies operating in Russia do not follow Russian laws and regulations. When a journalist asked Putin to explain to her 9-year-old daughter “what’s the big deal” for the summit and the Russia-U.S. relations. Putin said to make the world a safer and more reliable place, Russia and the U.S. should address together “issues of terrible weapons”, environment protection, food safety and healthcare. He called on reporters to cover this summit fairly “based on these considerations.”

When asked about U.S. sanctions against Russia, Putin said, "There's no reason to meet each other, and threaten, and exchange verbal attacks. We don't know what's brewing in the American political apparatus. Who will prevail? Who's to say? Hopefully, constructive steps will be made after this session." 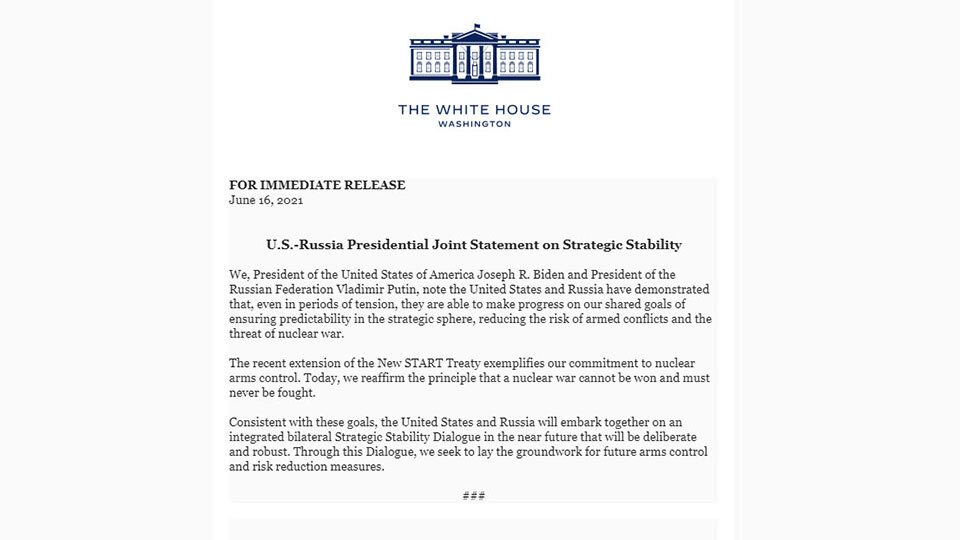