According to a statement released by Pakistan's Ministry of Foreign Affairs, a bus carrying Chinese workers on Wednesday plunged into a ravine after a mechanical failure resulting in leakage of gas caused a blast. Nine Chinese and three Pakistani nationals died in the incident.

The Chinese side was shocked by the incident, hoping that the Pakistani side could quickly investigate the cause, treat the injured, address the victims and prevent a similar scenario in the future, Wang said.

Wang also noted if it's a terrorist attack, Pakistan should catch the perpetrator immediately and bring them to justice.

He said Pakistan should further boost security on the bilateral cooperation projects and ensure a smooth and safe operation.

Qureshi, on behalf of the Pakistani government and the people, expressed condolences to the Chinese side and said initial investigation shows it is an accident, not a terrorist attack.

He vowed to continue the investigation and share the results with China.

He also said Pakistan will try all it can to protect the safety of the Chinese nationals in the country. 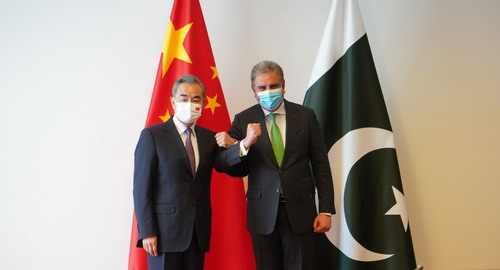 As all-weather strategic cooperative partners, China and Pakistan unwaveringly support each other on issues concerning their respective core interests, and they should carry on such a good tradition, Wang said.

China is willing to use the opportunity of marking the 70th anniversary of the establishment of diplomatic ties with Pakistan to build on the past experience and plan further development of bilateral relations to jointly address changes in the international and regional situation and bring their relations to a higher level, he said.

China will continue to provide vaccines to Pakistan and help it completely defeat the COVID-19 pandemic, Wang added.

Qureshi extended his warm congratulations on the 100th anniversary of the founding of the Communist Party of China, saying that Pakistan welcomes and supports China's development, and is committed to broadening the traditional friendship between the two countries.

Pakistan is grateful for China's provision of precious assistance to its pandemic fight, he said, adding that his whole country backs the Pakistan-China Economic Corridor and hopes that the major project will yield more results and facilitate Pakistan's development.

Wang and Qureshi also had an in-depth exchange of views on the current situation in Afghanistan, agreeing that it presents both challenges and opportunities.

They agreed that steps should be taken to implement the principle of "Afghan-led and Afghan-owned," and that more attention should be paid to the role of Afghanistan's neighboring countries, while communication and coordination among stakeholders should be strengthened for joint response to and guidance for the evolving situation in Afghanistan.

They vowed to strengthen coordination, prevent a resurgence of terrorist forces, facilitate the resumption of intra-Afghan talks, build a broad and inclusive political framework.

The two sides also said they will "always stand firmly together and support each other" on issues related to core interests.