China's Foreign Minister Wang Yi held a virtual meeting Wednesday with the U.S. Special Presidential Envoy for Climate John Kerry, who is in the northern Chinese municipality of Tianjin for climate talks.

Both agreed that climate cooperation between the two major powers is critical, a release from the Foreign Ministry said.

Speaking via video link, the Chinese foreign minister told Kerry that China-U.S. climate cooperation would benefit humanity, but it could not be isolated from worsening relations generally.

He urged Washington to take concrete actions to put the bilateral relationship back on track.

"We have shown our sincerity. Everyone who met with you will have to spend two weeks in quarantine, but we're willing to pay that price, to discuss cooperation with the U.S. on affairs of mutual concerns," Wang said.

For China and the United States, as two major countries in the world, cooperation is the only right choice and the keen expectation of the international community, he told Kerry.

Wang said the two countries had carried out fruitful dialogue and cooperation bilaterally and on major international and regional issues including climate change, delivering tangible benefits to the two countries and peoples.

The past achievements indicated that the two countries should respect each other and seek common ground while shelving differences to reach win-win results, he said.

However, a major strategic miscalculation by the United States has resulted in the sudden deterioration of bilateral relations in recent years, Wang said, adding the ball now is in the U.S. court.

He urged the U.S. side to stop viewing China as a threat and rival, cease containing and suppressing China all over the world, and take concrete steps to improve ties.

Wang pointed out that the U.S. side had described climate change cooperation as an "oasis" of the China-U.S. relationship. However, if the oasis is all surrounded by deserts, then sooner or later the "oasis" will be desertified. 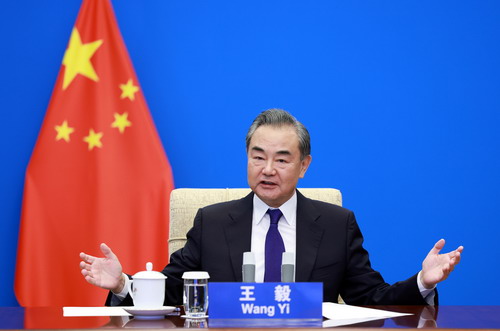 Kerry, a former U.S. Secretary of State, expressed his hope that the two sides could increase their desire to achieve leadership in climate change, and their commitment to fully implement the 2015 Paris Agreement, the release said.

"Given the science and what's happening, we all gonna be dealing with this for the rest of our lives," he said, adding that climate cooperation will also create opportunities for addressing difficulties facing U.S.-China relations.

"This challenge is as big as any that we face on a global basis, and China, my friend, plays a super critical role," he added.

Amid political tensions between China and the U.S., climate change is one of the few areas where the two major powers are working together.

The upcoming UN Climate Change Conference (COP26) in Glasgow will be a unique opportunity to demonstrate such cooperation and leadership.