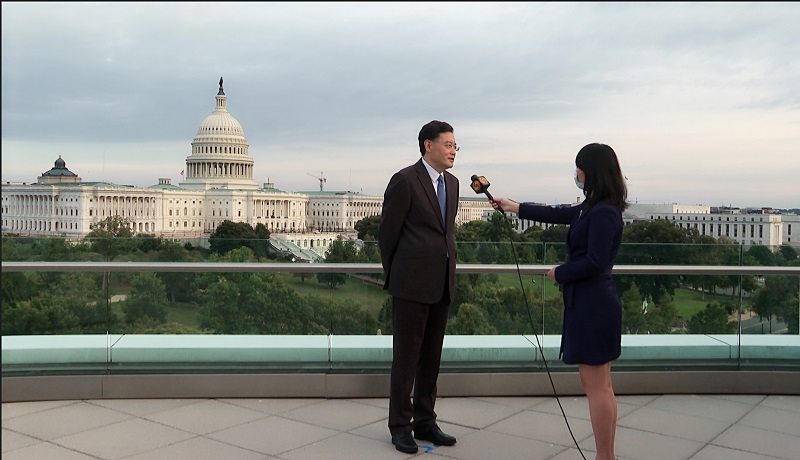 On October 8, Ambassador Qin Gang took an interview with Phoenix TV in Washington, D.C. and responded to USTR Ambassador Katherine Tai’s remarks about U.S. trade policies on China and the “recoupling” of the U.S. and Chinese economies.

Ambassador Qin said, we have noted Ambassador Tai’s remarks. China has always believed that our economic and trade relations are mutually beneficial, and this is also the fact.

Over the past 40 years of China's reform and opening-up, American companies have been deeply involved in China's development and have gained huge benefits from it.

China's development has provided numerous opportunities for American companies, created many jobs for the U.S. and supplied American consumers with inexpensive but quality products. These are undeniable.

China will continue to open itself wider to the world. It will continue to welcome companies worldwide, including American ones, to invest in China and provide a market-oriented, law-based and world-class business environment.

According to the recent report of the U.S.-China Business Council, 95% of the American companies surveyed made a profit in China last year, and 64% saw their revenue grow in the Chinese market.

China's development will continue to release huge market potential and vitality, creating greater opportunities for companies from America and other countries. Many American companies are concerned about the current China-U.S. relations and worry about big uncertainties.

In fact, China's sustained and stable development, market opportunities, and commitment to reform and opening-up are the largest source of certainty for them. If there is any uncertainty, it does not come from the Chinese side.

Ambassador Qin pointed out that since China-U.S. economic and trade relations are mutually beneficial in nature, we should give full consideration to each other's concerns and follow the principles of mutual respect and mutual benefit. It will simply not work to wantonly pressurize, or incite confrontation, or impose restrictions and suppression.

Some people call for “decoupling” from China. If any American company chooses to do so, it is choosing to decouple from the world's second largest economy, from the huge consumer market of 1.4 billion people, and from Fortune 500 rankings. I have noted that Ambassador Tai mentioned that the U.S. is now seeking to “recouple” with China, which has some positivity in it.

The two sides can sit down and sort out the areas of “decoupling” and how to get them “recoupled”. We are willing to have further communication and consultation with the U.S. side, properly manage differences, and jointly create conditions to expand the positive side of our relations on the basis of mutual respect and win-win cooperation, so as to ensure that China-U.S. relations, including our economic and trade relations, can return to the track of healthy and stable development.

This is also to implement the important agreement reached by President Xi Jinping and President Biden in their recent phone call.

When asked about his comments about the complicated signals of Ambassador Tai’s remarks, including the fact that she didn’t mention revoking tariffs on China, Ambassador Qin said, the two countries’ trade frictions over the past few years have once again proved that China and the U.S. both stand to gain from cooperation and lose from confrontation.

There is no winner in a trade war or tariff war. I believe that more Americans have got to understand it now. As two major economies, China and the United States are one of the most important trading partners for each other. It is just normal for us to have economic competition and trade frictions.

The key is how to deal with them. We advocate that we should pursue solutions acceptable to both sides through communication and consultation, based on the principles of mutual respect and mutual benefit.

Ambassador Qin said, China also has its own concerns. In recent years, it has become increasingly difficult for Chinese companies to invest and go public in the United States.

At present, more than 900 Chinese entities have been included in various lists of restrictions by the United States. Chinese companies face unfair treatment. In particular, the U.S. is increasingly using "national security" as an excuse to suppress Chinese companies and restrict bilateral economic and trade exchanges and cooperation. If this is allowed to continue, it will cause more serious consequences.

When asked about his comments about the U.S. claim that China has not fully implemented the Phase One Trade Agreement, Ambassador Qin pointed out that China has always kept its promises in state-to-state relations.

Despite the serious difficulties brought by COVID-19 over the past year, China has sincerely and steadily implemented the agreement. From IPR protection, to expansion of agricultural imports from the U.S., to opening-up of the financial sector, we have taken tangible steps and made important progress.

In contrast, the U.S. has set up multiple obstacles and restrictions on Chinese enterprises and on our economic and trade exchanges and investment cooperation.

Recently, the two countries have maintained communication and dialogue at various levels in the economic and trade field. Whatever concerns that the two sides have can be put on the table for discussion, but the U.S. side must take a pragmatic and sincere attitude.