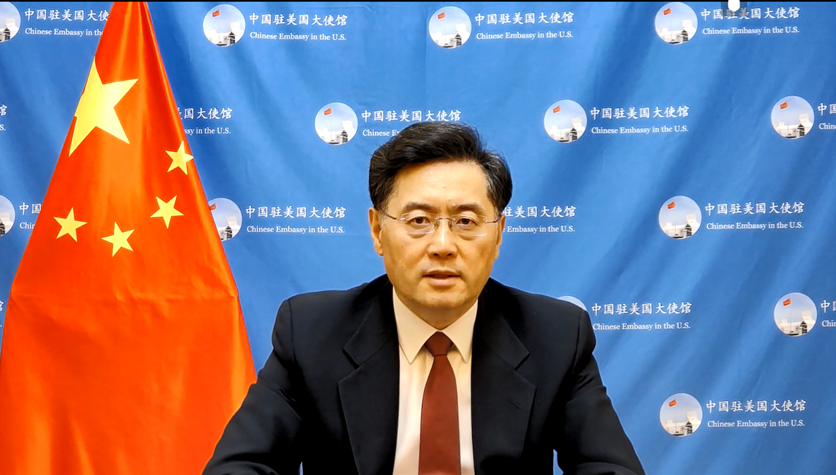 On November 30, Chinese Ambassador to the U.S. Qin Gang attended through video the event celebrating 50th anniversary of China-U.S. "Ping-Pong Diplomacy" hosted by Lincoln High School of Tacoma, Washington. Below is the full text of Ambassador Qin's speech at the event:

It is a great pleasure to join you in celebrating the 50th anniversary of Ping-Pong Diplomacy. Ping-Pong is China's national sport. I have been following closely the Houston World Table Tennis Championships these past few days, especially the two pairs of Chinese and American mixed doubles players. I'm excited to share with you that one of the pairs has won the bronze medal. My congratulations to them for their wonderful performance! Their matches are bringing us back to the memory of "Ping-Pong Diplomacy".

At the Nagoya World Table Tennis Championships 50 years ago, Chinese ping-pong player Zhuang Zedong met American player Glenn Cowan who accidentally got onto the bus of the Chinese team. They had a nice talk, and became friends. After learning of their story, the elder generation of Chinese and American leaders — Chairman Mao Zedong, Premier Zhou Enlai, and President Richard Nixon — showed extraordinary strategic foresight and enabled exchange visits between the ping-pong teams of the two countries. The story of "a small ball moving the big ball" ushered in the historic normalization of China-U.S. relations.

Half a century later, we are commemorating "Ping-Pong Diplomacy" because it created history, and also because its spirit will enlighten the future. Let me explore with you the magic of "a small ball moving the big ball" and China-U.S. relations.

Maybe you have learned about contingency and necessity in your philosophy classes. When it comes to "Ping-Pong Diplomacy," the encounter of Chinese and American athletes on the bus was contingent, but "Ping-Pong Diplomacy" has made history, because the development of China-U.S. relationship serves the fundamental interests of the two countries and peoples, its normalization represents the trend of that time, and conditions were ready for it to happen. It is something certain and inevitable. In 1970, in his meeting with American journalist Edgar Snow, Chairman Mao Zedong said, "China and the U.S. will establish diplomatic relations anyway. How can the two countries stay out of diplomatic ties for 100 years?" President Nixon observed in the same year, "it is certainly in our interest, and in the interest of peace and stability in Asia and the world, that we take what steps we can toward improved practical relations with Peking". Chinese leaders made the decision and personal commitment to launch "Ping-Pong Diplomacy", and Dr. Kissinger made a secret visit to China in July 1971. Then in February 1972, President Nixon paid an "ice-breaking" visit to China.

Maybe you have learned about catalytic reactions in chemistry classes. In China-U.S. relations, "Ping-Pong Diplomacy" was just like a catalyst that acted on the sincere wish and needs of the two peoples to break down barriers, strengthen communication, and enhance understanding and friendship. It generated huge energy. Such energy has been able to go beyond the two countries' differences in ideology and social system, and bring about tangible benefits to the people of the two countries and the world over the past decades. Through our cooperation and exchanges, we have discovered that the two peoples have far greater commonalities than we thought, and our two countries have far more common interests and cooperation needs than differences and problems.

China-U.S. relations are going through some difficulties right now. How can we keep the "big ball" moving forward under such circumstances? Maybe we can use some terms from your physics classes, that is, we need to constructively manage differences to reduce resistance and friction in our ties. We need to expand cooperation and exchanges to continue the momentum and boost the acceleration of our friendship. I believe you have learned about the virtual meeting between President Xi and President Biden not long ago. In the meeting, they have recognized that China-U.S. relations are extremely important and must not be messed up. They have also pointed the direction for and injected energy into the growth of our relations.

In September 2015, President Xi paid a visit to Lincoln High School and presented ping-pong equipment to you as gifts. I'm very glad to hear that since then, ping-pong has become a hit in your school. I hope that you can keep up practicing and maybe play in future Championships. More importantly, I hope that you will do your part and join forces in spinning the "small ball" to move forward the "big ball" of China-U.S. relations.