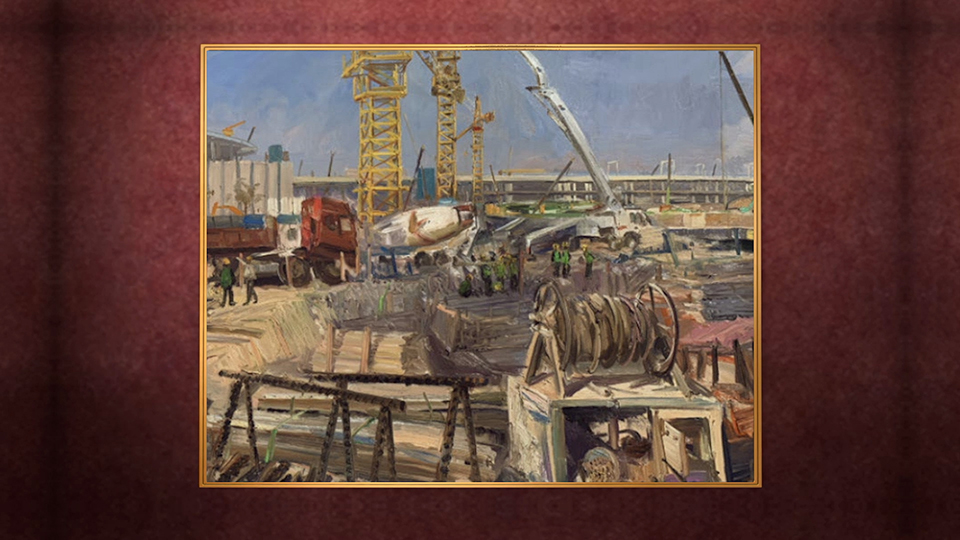 This oil painting was created by Chinese artist Fan Di'an in 2020.

In 2017, China approved the development of Xiong'an New Area, located about a two-hour drive from its capital Beijing and in the center of the Beijing-Tianjin-Hebei region.

Xiong'an is designed to become an intelligent and green city featuring high-tech and innovation to attract global talent.

The plan will help ease the strain on resources in Beijing and create ​a new engine for the coordinated development of the region.

Over the past four years, more than 160,000 people have engaged in ​implementing more than 120 major projects in Xiong'an, from infrastructure construction to ecological restoration.

An intercity railway linking Xiong'an and Beijing went into service in December 2020, shortening the commuting time between the two cities to 50 minutes.

As of October 2021, nearly 500 residential buildings had been completed in Xiong'an.

Meanwhile, more than 3,000 enterprises and companies have relocated to Xiong'an from Beijing, including ​the headquarters of some state-owned enterprises, universities, and hospitals.

Leading ​Chinese tech companies such as Tencent, Alibaba and Baidu are also open​ing offices in Xiong'an, as the area has great potential for developing technologies such as 5G, autonomous driving, cloud computing, blockchain and big data.

Restoration of the region's ecological environment is a top priority in the construction of Xiong'an. According to the city's development plan, 70 percent of the city's total area will be made up of forests, greenery and ​bodies of water.

Xiong'an New Area is expected to serve as a national model for high-quality development in China.