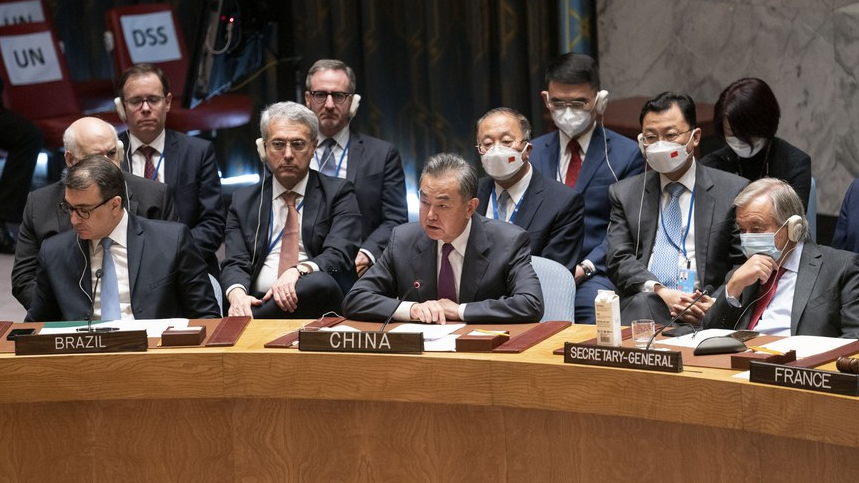 Noting that China's stance on the Ukraine issue is consistent and clear, Wang said the sovereignty and territorial integrity of all countries should be safeguarded, the purposes and principles of the UN Charter upheld, the legitimate security concerns of all parties taken seriously and all efforts conducive to the peaceful settlement of the crisis supported.

On the current situation, Wang said, China has put forth a four-point proposal.

First, it is a must to keep to the direction of promoting dialogues and negotiations. It is imperative that the parties concerned resume dialogues as soon as possible, integrate legitimate concerns into negotiations and put feasible options on the table so as to bring about outcomes for peace, Wang said.

Second, joint efforts must be made to ease tensions. All parties concerned should exercise restraint and refrain from words and deeds that aggravate confrontation, Wang said, adding that the international community should play a constructive role in helping cool the situation.

There is no room for trial and error as far as the safety of nuclear facilities is concerned, and any risk of accidents must be avoided, Wang said.

Third, the humanitarian situation must be alleviated. Wang said the international humanitarian law should be observed to minimize civilian casualties.

International investigations should be objective and fair, based on facts and avoid politicization, said Wang, adding that UN humanitarian agencies should be supported in continuing to provide assistance to the affected people.

Fourth, full efforts must be made to contain spillover effects. Wang called for joint efforts to ensure the stable operation of the global energy market and support for UN Secretary-General Antonio Guterres in resolving the issue of food shipments from Russia and Ukraine.

Wang stressed that the Security Council should uphold the basic principle of objectivity and justice, follow the right direction of stopping fighting and promoting talks, give priority to using mediating tools and push forward the process of political settlement.