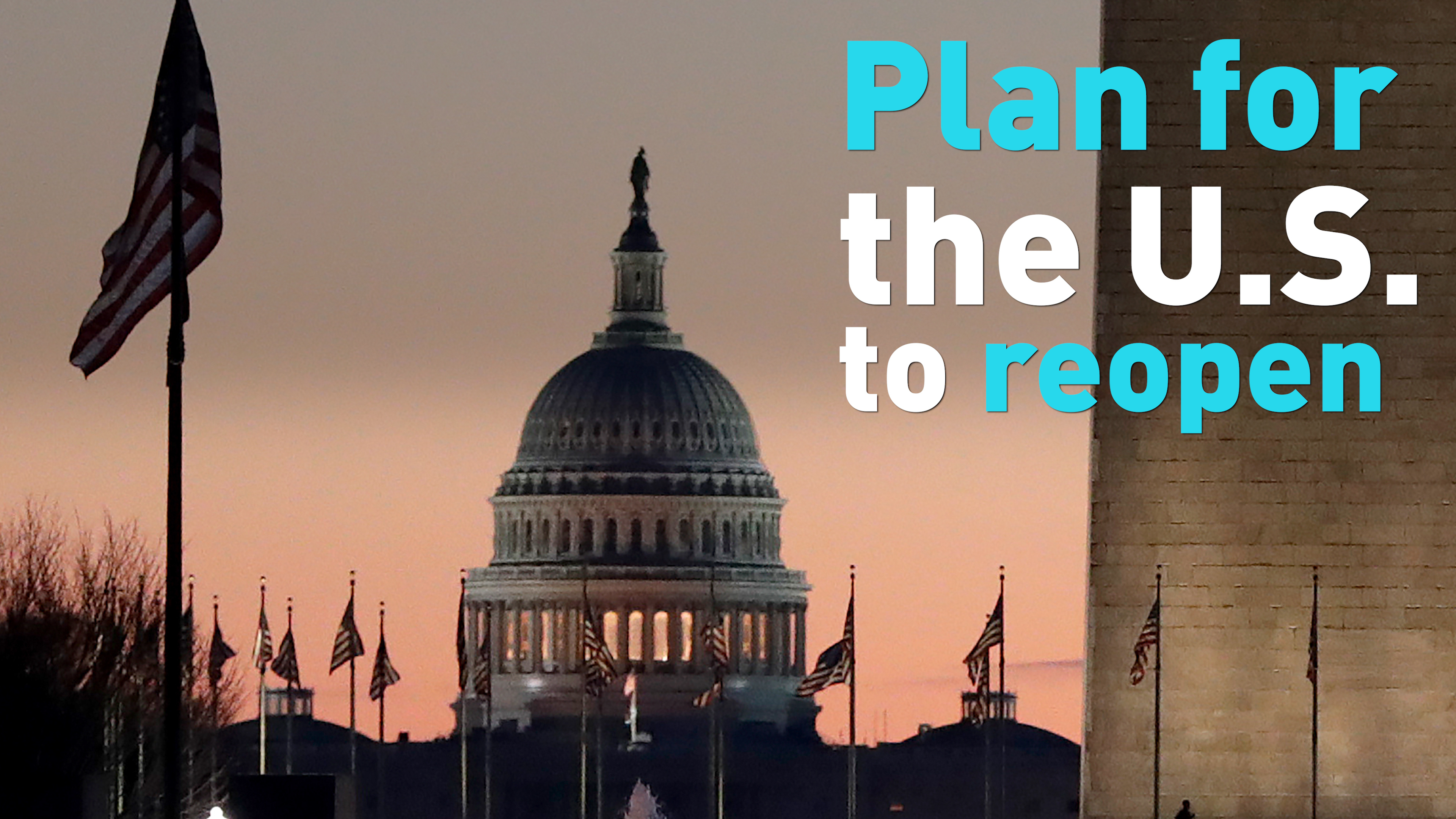 U.S. President Donald Trump has released guidelines to "open up America again" amid COVID-19 outbreak. He said state governors will be empowered to choose whether to open or remain closed, depending on their own situation.

The guidelines are aimed at easing social distancing requirements and allowing areas with declining COVID-19 cases to return to providing normal commerce and services. CGTN has summarized the three-phase plan:

Phase 1
Vulnerable people are to shelter in place.
Telework if possible and others return to work in phases.
Schools will remain closed.
Gatherings limited to less than 10 people.
Minimize non-essential travel.

Phase 2
Vulnerable people are to remain sheltered in place.
Employers should continue encouraging telework.
Schools will be re-opened.
Gatherings limited to less than 50 people.
Non-essential travel may resume.
Larger venues like restaurants, bars and gyms may reopen with social distancing.

Each phase is set to last a minimum of 14 days, with some parts of the country expected to return to normalcy after a month of evaluating if the process has not caused any uptick in COVID-19 cases.

Trump walked back earlier remarks regarding his desire and ability to force U.S. states to adhere to his orders to reopen. "You're going to call your own shots," Trump told governors, according to an audio recording obtained by the Associated Press.

According to the U.S. Department of Labor, 5.2 million more Americans applied for unemployment benefits last week. That brings the total number of Americans out of work to 22 million in the past four weeks, which means one in seven American workers is now jobless.

Earlier on Thursday, several U.S. governors of Midwestern states said they are coordinating to reopen the Midwest regional economy.

On the release of the guidelines, renowned U.S. medical expert Dr. Anthony Fauci warns that the dominant issue for reopening is the "health and safety of the American public."

Pressure on the WHO escalates

Days after Trump announced decision to halt funding to the World Health Organization (WHO), Republican lawmakers stood together and called for the UN agency chief to step down in direct response to Trump's criticism against WHO's handling of the coronavirus outbreak.

Seventeen of Trump's fellow Republicans on the House of Representatives Foreign Affairs Committee wrote a letter to Trump supporting his announcement this week that he was withholding funding for the WHO, and saying he should condition the resumption of contributions on the resignation of Director General Tedros Adhanom Ghebreyesus.

Trump drew immediate condemnation on Tuesday from many world leaders and health experts, as well as U.S. Democrats, by saying he would halt U.S. funding of the Geneva-based WHO over its handling of the coronavirus pandemic.

"At times, the WHO is the only organization working on the ground in the worst places in the world, and the U.S. should continue to support this important work," said the letter, led by Representative Mike McCaul, the committee's senior Republican.

"However, it is imperative that we act swiftly to ensure the impartiality, transparency, and legitimacy of this valuable institution," the letter said.